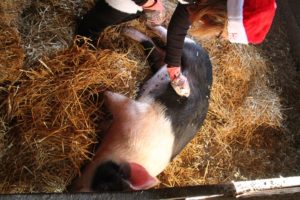 YORK – This porker fit comfortably on Teresa Easton’s lap when it was first scooped up on the side of the road in Geneseo. Scared and alone, the pig’s future lay in the hands of her captors, who unbeknownst to her would soon become her best friends.

Fast forward about five months. ‘Genny,’ bred as a meat pig destined for the dinner table, now shares a nice comfy barn with some chickens and a duck. An Australian Shepherd makes the rounds occasionally, and a beagle puppy sometimes comes by looking for mischief. But most importantly, Easton and the resident farmer, Donna, come by to say hello.

“Genny is just the sweetest girl,” said Easton, who runs Country Clipper Pet Grooming down the road. “She just loves attention and belly rubs. She’s very spoiled. She’s a group effort and we all pitch in to care for her.”

In mid July, Aprile Mack, Secretary to the Village Planning Board and Deputy Clerk/Treasurer for the Village Board of Trustees, saw a small animal running wildly through traffic on Rte. 20A (Lakeville Road) in Geneseo. At first she thought it was a dog. When she got a better look, though, it was without question a little pig. She called the police and Easton, who grew up on a farm and is locally renowned as a real animal whisperer. Geneseo Police Officers Ben Swanson and Michael Donals caught the pig, and Easton showed up with a small dog crate to safely take her in.

Since that day, Genny hasn’t slowed down for anyone. Courtesy of a handshake deal with Wegmans, Easton can feed Genny as much slightly expired food as she likes. Bread rolls, corn-on-the-cob, watermelon, lettuce, apples…you name it, she eats it.

In July, Genny weighed about 20 pounds and comfortably sat in a lap. She now tips the scales at 400 pounds, as much as a fully-grown donkey, and isn’t even close to finished growing. By the time she is grown up, she could be a real gentle giant at 800 pounds.

“She’ll be moving to a bigger outdoor enclosure in the spring,” said Easton. “It’s just unbelievable how big she got, and how fast!”

She has already made her debut at a few events as a petting zoo attraction. She is big, strong, densely muscled, but very friendly. At her new digs in York, Genny grunts excitedly at the wooden fence at the door of her stall at Easton or Donna’s approach and lies down for a belly rub like a massive dog. She gingerly grasps a whole apple from Easton’s mitten, takes a step back and completely smashes it with a big chomp.

Easton said that Genny will continue to make appearances at petting zoo events and probably live the rest of her days surrounded by barnyard friends. A small hole in her left ear, which once held a tag with an I.D. number, is the only mark of her former life.

“No matter what, Genny will never be sent for slaughter,” said Easton. “She escaped that truck for a reason. She’s such a special girl.” 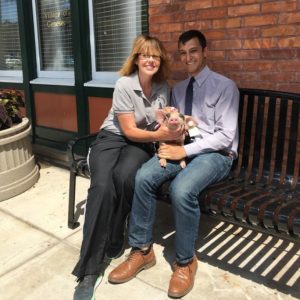 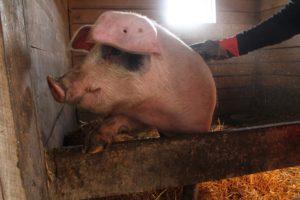 The hole in her ear is the only sign that Genny was ever a meat pig. (Photo/Conrad Baker) 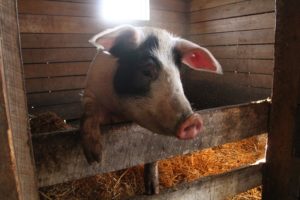 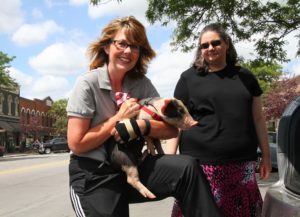 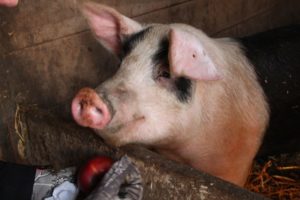