GENESEO The ice rink on SUNY Geneseo’s campus that has become a focal point for the Village’s youth hockey programs is in the game to win $150,000 in upgrades and a chance to host an NHL game.

‘The Ira’ was nominated by a ‘Charles L.’ for the Kraft Hockeyville contest and is now one of 10 finalists in the nation, open for public vote here.

“The Ira is the only hockey rink in the area, and thanks to the SUNY Geneseo Ice Knights, has become the main focus of the entire community since the early 80’s, each year we all eagerly wait for the new season schedule to be announced, so that we can produce our schedules for the year around it,” posted Charles L. “The Ira was built in the 50’s, and hasn’t been renovated since the 80’s, and the arena’s 2500 capacity is tested every game, with every available seat filled, fans standing 3 rows deep along the entire railing around the rink, and all the isles filled with people who were unable to find a seat or standing room. The communitie’s passion and loyalty for Geneseo hockey was truly tested last year, when in the middle of the season, Matthew Hutchinson from Vancouver Canada, a senior defenceman, and volunteer fireman for Geneseo, NY, was killed in a double murder suicide that also killed one of the SUNY Geneseo’s women’s basketball players (both victims). But that wasn’t enough to topple Geneseo hockey, and fans turned out in force for our next game with close to 3000 fans in attendance, the Ice Knights won that game, and went on to be a part of the DIII final four for only the second time in history, and the second time in 3 years, and during one of the final home games of their season, the Knight retired Hutchinson’s #23, and surprise surprise, they won that game for Hutch too.

‘But the Knights aren’t all about their season, as after almost every home game, the Knights return to the Ice, and practice with any and all of the Livingston Blues junior hockey team (but mostly just mess around on the Ice with them for a good half hour or so). The sad thing is, their rink, the Ira S. Wilson Ice Arena, is falling apart due to age, the cement walls are beginning to crack, the 50+ year old wooden bleachers are falling apart, and the arena itself is entirely too small for all of the thousands of fans whos[e] lives revolve around the ice, not to mention that our very old, and only, zamboni broke down during one of the games last year, and spilled oil on the ice. So all I am asking for is help saving an old rink in a passionate town from falling apart.” 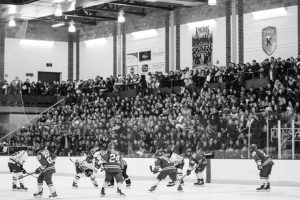