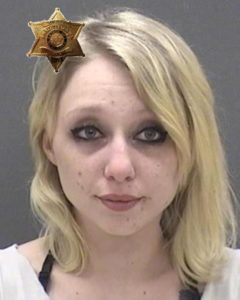 LIVINGSTON COUNTY – After a routine stop for a traffic violation, a Geneseo woman was arrested for allegedly possessing cocaine.

According to a press release from Livingston County Sheriff Thomas Dougherty, Tristin T. Hagen, 20 was charged with Criminal Possession of a Controlled Substance in the 7th Degree, after Deputy Conner Sanford pulled her over for an alleged traffic violation on I-390.

Hagen was arraigned in the Town of Livonia Court before Judge Linsner where she was remanded to the custody of the Sheriff on the recommended bail of $750 cash bail or $1,500 bond.

Deputy Whitford and Deputy Butterbrodt assisted with the arrests.