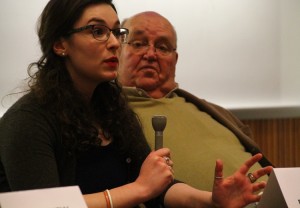 Incumbent Trustee Bob Wilcox (D) and SUNY Geneseo students Mary Rutigiliano (I) and Matthew Cook (I) answered questions that audience members submitted via note cards to be read by the moderator. Trustee candidates Leslie Carson (R) and Phil Jones (D) were absent from the forum. Carson had a conflict with her work as a nurse and Jones is traveling in the American West for the winter.

Cook, a Rochester native and junior SUNY Geneseo student, said if elected, that he would stay in Geneseo for the remainder of his four-year term, possibly while going to law school.

“I know that students love members of the community,” said Cook. “This is a great community, and it’s my home. I love Geneseo and I’ve been in and out of this village my entire life.”

Wilcox said that he disagrees with Rutigliano and Cook that students can responsibly serve the community as trustees.

“I disagree with students serving as trustees because of the fact that it takes a lot of time which I don’t believe students have,” said Wilcox. “It also takes a certain maturity and life experience to deal with this position.”

Rutigliano and Cook both said that SUNY Geneseo students are a significant portion of the village population and deserve to have a student on the village board.

“Having someone who can thoughtfully see both sides of Main Street as both a student and as a life-long resident of Geneseo is something that could be really refreshing for our community,” said Rutigliano.

“If you don’t have students at the table, then you can’t have democracy happen in a way that’s going to benefit the community as a whole,” said Cook. “The fact that we have students here and involved means that they are invested in the community. Our great country was founded because there were people not being represented.”

Wilcox said that he has spoken with many locals do not want the students to be elected.

“I represent a lot of townies who simply do not want students having anything to do with their tax rate or water,” said Wilcox. “60 percent of students are living on campus and they do not pay into property taxes. I hate to be negative, but the truth has to be brought out here.”

An audience question asked the trustee candidates what the impact was of the New York State property tax cap on the Village of Geneseo.

“Correct me if I’m wrong, but I think the tax cap is somewhere around 6.5,” said Rutigliano. “It’s on the first page of the budget so I could be wrong, but that’s kind of our revenue limit, so we have to manage things around as much as we can to tax that to what we have to maneuver around. That involves a lot of creativity and fund appropriation. It just means that we need to work together with our community to see what’s most important and work together as a board of trustees with the mayor and the deputy mayor to do what’s best for the village with the limited funds that we have.”

Cook said that in order to address tax cap issues, the Village government and residents need to engage in a discourse so that it is clear what the residents want.

“The big thing with a small village such as Geneseo is that there is very limited revenue that can be collect from taxes,” said Cook. “I think a very big thing that has to happen, and it’s actually a great thing about a small Village is you have to talk with the members of the village and see what they want done with their taxes and what type of return that they want to see on that. I think its very important you have a discourse between your village trustees and your community. You get very displeased as a community when you’re not seeing a return on the tax money that you’re giving, specially when it’s so limited, as has been seen.”

Wilcox said that the tax cap prevents Village employees from receiving raises for the hard work that they do.

“The actual tax cap is 2 percent, or the rate of inflation, whichever is less,” said Wilcox. “The Village Board is now working on the budget for the next year, ’16 and ’17. We are going to deal with a tax cap of 0.12 percent, and it is almost impossible. We are so fortunate that we have great workers in this village, our police, our DPW guys, and they deserve a raise. But with a 0.12 percnet theres just no way. […] It doesn’t matter how hard you work at it, if the revenue isn’t there it isn’t there.”

“Again, there are strict limits on the amounts of debts that can be taken out and revenue that can be set aside for a rainy day fund,” said Wilcox. “I know our bond rating is as high as it can get, because of the hard work of previous Boards and current Boards and the Mayor. We were able to take out $1 million this summer for the Main Street water and sewer project. There are limits on how far you can go with bonding and we stay well within that limit.”

Rutigliano said that she is not familiar with bond ratings, but that one of the best parts about legislating is the opportunity to learn.

“It’s not something that I know a lot about, but that question was asked and I learned a lot from what Mr. Wilcox said,” said Rutigliano. “Now that I know that I don’t know about it, I can read more up on it. And that’s the beauty of legislating, that there’s so much to learn, and I’m excited to learn about that.”

Cook agreed with Rutigliano and said that learning is a large part of being an elected official.

“Even just listening in that minute and 30 seconds of what Mr. Wilcox said, I learned so much about the process and I think that’s a huge part of what being a legislator is,” said Cook. “You do your homework and you read up and you learn more about the needs of the people who have elected you to that position. I think that the million dollars over the summer is highly commendable and the farsightedness that Mr. Wilcox was talking about needs to be continued.”

No questions raised by the audience directly addressed the locally highly controversial and divisive Social Host Law, a new village law under which those found to be ‘in control’ of a party or gathering where underage drinking is found to be occurring can be ticketed for a violation and fined $250, or $500 for a second offense.

Wilcox posed his own question to Rutigliano and Cook, asking how they would deal with student constituents insisting that they do something about the Social Host Law if and when they are elected.

“It’s not the only issue that we’re trying to focus on in our campaign and our community,” said Rutigiliano. “But speaking on that, this kind of law is driving drinking underground and therefore making drinking more unsafe. When students are not given the option of the Good Samaritan Law, which I remember Chief Osganian said at a forum just a couple weeks ago that the Good Samaritan Law does not apply under the social host law, that presents a problem. If people are having a party and they’re all overs, and some freshmen come in and they’re wasted out of their minds, you call the cops, you’re do right thing. But when those freshmen catch wind of what is going on, then they can say ‘oh we’ve been drinking here for an hour and they were serving us drinks.'”

Cook said that there are definitely issues with the Social Host Law, but it does not have to be repealed to be addressed.

“The social host law has not achieved its goal,” said Cook. “When you have a law that’s passed, and it doesn’t affect you, it affects another group of people, and those people were not brought to the table, you’ll see a lot of negativity towards that law. I’m not advocating for a full repeal […] but what needs to happen is to open up a much larger discussion with students at the table. Students need to be treated as an equal so that the problem of underage drinking can be lessened or even eliminated. I think the law puts students in a very tough situation where they’re playing with someone’s life. I’d hate to be in that situation.”

A table was set up in the back of the room with literature on some of the candidates and materials to register to vote.

The election is March 15. 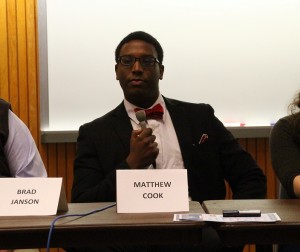 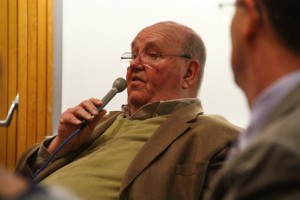 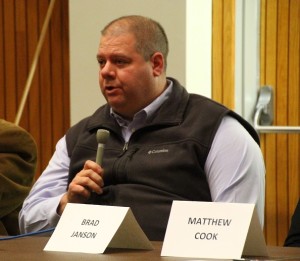 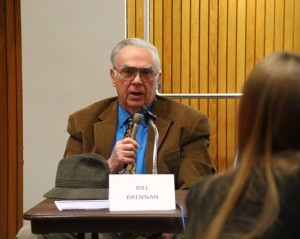 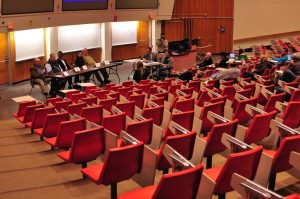 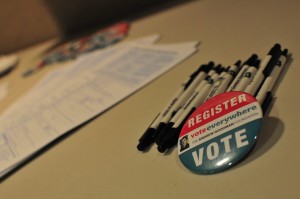