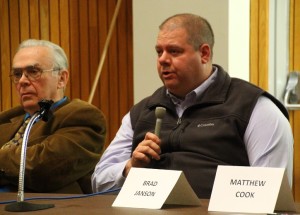 GENESEO – Two candidates for Geneseo Village Justice attended Wednesday night’s candidate forum at SUNY Geneseo to answer questions on their candidacies and the duties and sacrifices a Village Justice has to make.

“I started working here in 1968 and since 1971 I have lived in the Village,” said Brennan. “I served on faculty since the 1970’s. I spent more than 20 years as an advisor for a coed social group, Gamma Chi Epsilon. I served as a hearing officer for the Livingston County Department of Health. I was on the Environmental Management Council and chaired it for a short time. I also continued as a geologic consultant for individuals and companies.”

“I was raised in Geneseo. I left to attend school and came back and have lived here for the past 15 years,” said Janson. “I’m married and have two kids. I am a practicing attorney in New York State and have been for 16 years. I have been a sitting justice for the past 8 years.”

During his opening statement, Janson urged voters to truly consider the best candidate for Village Justice and not simply vote based on party lines.

“I’d like to remind everyone that justice is supposed to be blind, and along those lines, the justice position is really not a political position,” said Janson. “There is no agenda put forward. You are there to interpret and enforce the law, decide if a defendant is guilty not guilty, or help parties mediate a case. I hope that when everyone goes to the ballot box, whether for my companion Mr. Brennan, for whom I have the utmost respect, or for myself, that you don’t just vote party lines. It’s about who’s the proper candidate.”

In New York State, Village Justices are not required to be licensed attorneys or have a law degree. Justices are forbidden from participating in any political fundraising or political functions. As both Brennan and Janson explained, a Justice can be called on at any hour when the police arrest a suspect and bring them in to be arraigned on the charges and address whether they will be held in jail.

“There is no real schedule. you are on call 24 hours a day, 7 days a week,” said Janson. “They can call you out any hour of any day for an arraignment. I’ve been called out a 3 in the morning on a Tuesday for arraignments. The arraignment gets done at 5 and at 7 I’m in the shower getting ready to got to work.”

Brennan said that as a retiree, he is able to commit to unstable hours such as this.

Both candidates chose to give brief statements on the highly controversial Social Host Law, a village law passed in 2015 under which those found to be ‘in control’ of a party or gathering where underage drinking is found to be occurring can be ticketed for a violation and fined $250, or $500 for a second offense.

“As an attorney, I can tell you that people are overreacting to this law,” said Janson. “There is already a mechanism in place to do exactly what this law does. That is called Endangering the Welfare of a Child. [Endangering] is a misdemeanor charge that goes on your permanent record, that you have to disclose at any job application and many other instances. The village ordinance, and it is an ordinance, is a violation. If you are convicted under the Social Host Law and are ever asked if you have been convicted of a crime, you can honestly and openly say ‘no.'”

“I think if students in general follow simple very simple rules, […] it is very unlikely they would come in conflict with any laws in the village or state,” said Brennan. “Number one, never get involved in any activity that involves hazing, or any activity that involves performing a prank on a fellow student involving alcohol or a controlled substance. Second, don’t stand around when they see a peer overindulging and losing control of themselves on alcohol or a controlled substance. Take some positive action. Number three, don’t stand around if one of your fellow students under the influence of alcohol or any controlled substance attempts to get behind the whee of a car.”

A table was set up in the back of the room, Newton Hall room 202, with literature on some of the candidates and materials to register to vote. 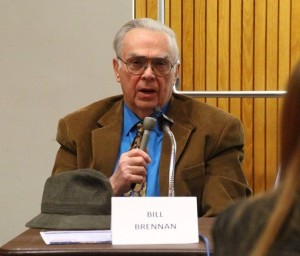 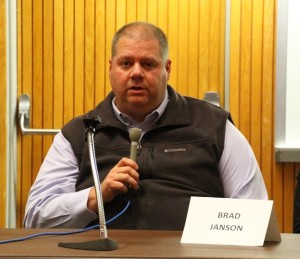