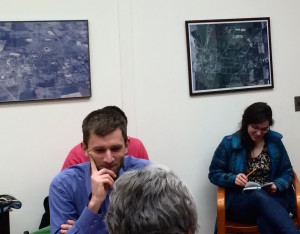 GENESEO – Cheese and crackers courtesy of fellow trustees helped wish Former Trustees Ben Gajewski and Bob Wilcox well on their way after years of service on the Village Board.

Gajewski said goodbye to the Board Monday night, thanking its members for their cooperation and adjourning the final meeting of his four-year term. He chose not to run for re-election on March 15. Wilcox has served as Trustee for eight years, ran for re-election and was defeated by SUNY Geneseo students Mary Rutigliano and Matthew Cook.

“It’s been very humbling to be chosen by the community to serve for the last four years,” said Gajewski. “It’s been a great experience and I think we got a lot done. It is good to see how efficient a government we’re running, not only not only from our department heads but from our volunteers. I feel that I’m leaving it in good hands.”

Wilcox is out of town and could not make it to Monday night’s meeting.

Gajewski was elected to the Board in 2012 with already multiple roles to fill. Even before graduating SUNY Geneseo in 2008 with a bachelor’s degree in sociology and a minor in environmental studies, Gajewski caught the attention of the Genesee Valley Conservancy by assisting all areas of the organization, starting as an intern. He then came to serve as GVC’s first Stewardship Director for five and a half years, as well as the organization’s Interim Executive Director for six months in 2011. Since 2013, Gajewski has maintained his role as GVC’s Executive Director since 2013, a year after his election to the Board.

Throughout his time in public office, Gajewski has assisted the community by keeping tabs on finances, and especially through his interests in the environment. The GVC Website characterizes Gajewski as an active outdoor enthusiast, whose lifestyle complements the goals of the Conservancy. While he has run in and won many a race as a runner, he dedicated much of his time and effort to the Board office.

Wilcox served eight years on the board, working closely with SUNY Geneseo and continues to serve on the Geneseo Tourism Committee. He also maintains his position as the co-chair of Geneseo Healthy Campus Community Coalition (GHCCC) along with Dr. Sarah Covell, Alcohol and Other Drug Program Coordinator for SUNY Geneseo. Together, Wilcox and Covell oversee GHCCC, whose members seek to lower levels of underaged drinking, as well as reduce occurrences involving excessive consumption of alcohol in the student community.

Gajewski’s took his last official action as Trustee by closing Monday night’s meeting with a motion to adjourn.