LIVINGSTON COUNTY – A Geneseo Village Trustee is calling for the release of a Livingston County farm worker who was arrested by U.S. Immigration and Customs Enforcement (ICE) last week.

Advocates for José Coyote Pérez are circulating an online petition calling for his release and encouraging the public to call the Office of the Chief Counsel at the Buffalo Federal Detention Facility. Perez’ most recent local public advocate is Geneseo Village Trustee Matt Cook.

“A friend was detained by ICE yesterday and needs all the support we can provide,” posted Cook to Facebook on Feb. 25. “His name is José Coyote Pérez. He is a father of three and longtime dairy worker in Western New York and has a permit to work in the US. Please consider calling ICE Buffalo Field Office at 716-843-7600 (Director Brophy) to request his release.”

The petition text is as follows:

In support of Jose Coyote Perez, community leader and member of Alianza Agricola and the Workers’ Center, please call:

Buffalo Fed. Detention Facility office of the Chief Counsel:
(716) 551-4741 and press 4# (four followed by the # sign)
Proposed script: My name is ______ I want to bring to the attention of the Chief Counsel the case of Jose Coyote Perez, A#099757267, who is in Batavia detention Center. He is the father of four children and community leader in Upstate and Central NY, member of the Workers’ Center of CNY and other community organizations. His case was administratively closed in September, but he was detained on February 24, 2017. Please release him and close his case again so he can return to his children and continue to be an advocate for human rights.

Be prepared that they may tell you that is not the place to call but just tell them you want to leave the message for the Chief Cousel (if she doesn’t answer), it is very important to tell them the A#
Jose is in good spirits, he knows he has a lot of support from all over Upstate and Central NY. Mil gracias.
2/23/17
We spent hours on the phone on Friday, February 24 trying to locate and confirm where Jose was being held. After many of you called and and put pressure on the ICE Buffalo Field Office, they finally confirmed that Jose is being held at the Buffalo Federal Detention Facility in Batavia. His A number is A099757267. It is unconscionable that ICE rips people from their homes and communities, stuffs them into detention centers, and then refuses to admit to detaining them until they are pressured to do so. 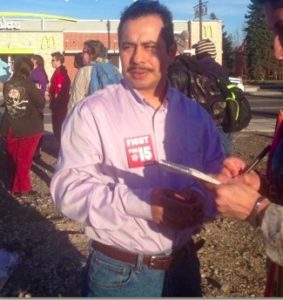