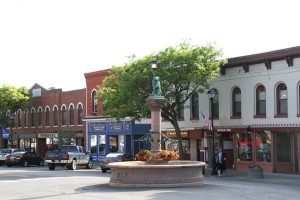 GENESEO – The Geneseo Tourism Committee officially announced their fundraising goal at Monday’s Village Board meeting and laid out their plans to continue to accelerate the village by interweaving their activity with SUNY Geneseo students.

Recent efforts include connecting people who are passionate about Geneseo with others who would like to learn more. Whitehead said that the goal is not just tourism promotion, it’s promotion of Geneseo in general.

Part of the general promotion initiative is to focus efforts to establish relationships and connect information between various shoe-ins in the community. According to Whitehead, linking people and sources summarizes the committee’s priorities, as they are really focusing on people who they think may come to Geneseo.

The first specific initiative discussed was outreach, which attempts to market the village to SUNY students and their families. Orientation Advisor (OA) and Resident Advisor (RA) tours on Main Street as well as information fairs are central to outreach initiatives. The OA and RA tours target students whose job on campus is to introduce new students to campus life and support them through their residency. Because these students are close to the new college experience, collaboration extends Tourism Committee efforts, which, according to Whitehead, see prospective students and families as a primary market demographic for promotion of the village.

“Incoming students and their families are really great examples of that group of people that we talked about who want to learn more about Geneseo,” said Whitehead.

Whitehead recalled new approaches taken in 2015, which involved asking OAs and RAs about their experience and the questions they get from prospective students and incoming freshman.

“People talked about going into Buzzo’s and, because the ukuleles were $29 dollars, all the OAs bought ukuleles,” recalled Whitehead. Conversation with OAs and RAs, offering their perspectives as student representatives, led the committee towards new ways to attract that demographic.

“Many communities do a list of top things to do,” said Whitehead. “We were able to work with the college and put together a list of things that freshman may want to do in their first semester. We talked about the ‘freshman 15’ and how it could mean gaining experience rather than gaining weight.”

Outside of the college, the Tourism Committee works with the Association for the Preservation Of Geneseo (APOG) on activities and events that preserve Geneseo’s historical structures and generate interest in history buffs from near and far.

Moving forward, the Tourism Committee may also introduce an E-Newsletter to keep the community up to date on tourism activities, transportation tactics, and cultivating downtown business, mostly through the Adopt-A-Business program.

Upon leaving, Whitehead thanked the village, Board members, and everyone who works with tourism for their support.