GENESEO – At a Tuesday press conference in the High School cafeteria, Geneseo Central Schools Superintendent Tim Hayes provided more details on specifically what will be done in the aftermath of the drug investigation that ended the school’s varsity football season.

Hayes said in his opening comments that the students involved in the incident, wherein a member of the football team is alleged to have stolen prescription Oxycotin pills and distributed them to six other members of the team, are kids and make mistakes.

“All of the kids involved in our varsity football team, in our athletic programs are our kids,” said Hayes. “And kids make mistakes. And our job as educators and as family and as parents and as teammates and as coaches is to hold people accountable and is to pick them up and it’s to move them forward.”

Hayes acknowledged that parents have come to him suggesting that Junior Varsity football players could replace the seven dismissed players and give the team enough players to continue their season. However, Hayes said that the District will not be doing so.

“That would effectively end the JV football season,” said Hayes. “If we take the best JV players from that program, that effectively ruins the rest of their season. We’re not going to do that. And so we’re faced with a situation where we have to forfeit the remaining games of our varsity season. We have dedicated varsity athletes who are crushed by this. And we understand that.”

The three remaining games in the varsity football season are forfeit along with Geneseo’s Friday night game against Boliver-Richburg. The investigation alleges that the players consumed the pills before that game on Friday.

Hayes declined to get into details of the specific conduct alleged or the details of how these seven students are being disciplined by the school. However, he did say that the actions taken will not affect the graduation of the students involved. As far as the remaining members of the football team, Hayes said that they will not be disciplined. He said that the incident is unlikely to impact the uninvolved students’ success in applying for colleges and that the District is ‘doing everything in its power’ to help those student-athletes’ chances for success in being recruited for college sports.

“We’ve also worked closely with the Geneseo Police Department and with the Livingston County Sheriffs as they are investigating aspects of this incident that have a legal aspect to them,” said Hayes.

Hayes added that there will be additional educational programs or talks for students because of this incident. 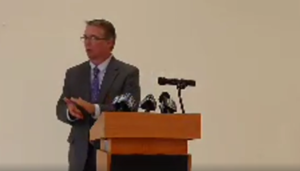