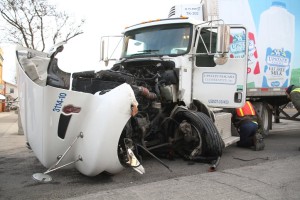 GENESEO – Geneseo Police ticketed the truck driver who destroyed the bear fountain on Thursday for failing to yield to a traffic island.

Gordon Gay, 49, of Rochester, was ticketed for Failure to Keep Right for a Traffic Island, a violation. He slammed into the fountain at about 24 miles per hour.

“At the end of the day, an accident is an accident,” said Geneseo Police Chief Eric Osganian. “He says the wind blew his truck to the right and he overcompensated to the left. He was not intoxicated. His phone records do not indicate that he was using the phone while driving. We looked at the truck’s black box and it indicates a speed of about 24, 23 piles per hour.”

At about 6:07 a.m., the impact knocked the fountain’s granite ‘bowl’ off of its foundation, toppled the pedestal, and dropped the iconic bronze bear, ‘Emmeline,’ into a hole under the foundation.

Gay suffered bruising to his ribs. He has been released from Strong Memorial Hospital.

“A semi is heavy,” added Osganian. “The fountain was just sitting on its foundation, after all. It’s a lot of granite but the truck could move it. There is no indication that the driver hit his brakes at all.”

The Association for the Preservation of Geneseo (APOG) is partnering with Moorland Studios, a nationally renowned outdoor monument restoration group, to restore the fountain. APOG keeps 3D images of the fountain’s every detail since its Gothic lamp was restored years ago.

The restoration will be funded partially by a ‘trust fund’ set aside by the community for the bear fountain in case of such accidents and partially by insurance paid by Upstate Niagara Cooperative Inc., who own the truck.

In the meantime, the Village has set up a lamp in the damaged fountain bowl, which has its lowest and least visible profile since 1888. 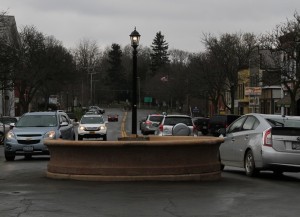 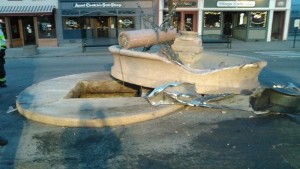