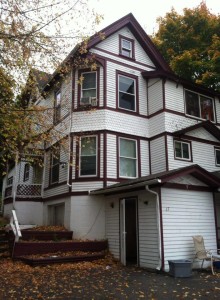 According to a press release from Geneseo Police Chief Eric Osganian, Geneseo Police are reaching out to the public to call (585) 243-2020 with any information about this incident, which is thought to have occurred in the early hours of April 10.

“The victim went to DK with a few friends at about 4 a.m. on April 10, but eventually his friends left,” said Osganian. “There was music, there was dancing. The theory is that a member of DK recognized that the victim was there alone and punched him in the face. The person who hit him may have been told to do so by another member of DK.”

The alleged victim was not transported to the hospital for any injuries.

The complaining witness originally approached SUNY Geneseo Police about the incident. SUNY Police turned the investigation over to Geneseo Police on April 16.

This is the third investigation into a physical altercation at the DK house in less than 6 months. The fraternity was put on ‘interim suspension‘ in December 2015 when three of its members, Perry Neci, 20, of Yorktown, NY, John Wolff, 21, of Bellport, NY, and Yagizan Balta, 24, of Turkey, were arrested for allegedly beating and injuring another student. Neci was re-arrested for an attack that is alleged to have occurred on Nov. 13, 2015.

All of these cases are currently pending in Village of Geneseo court.

All of these incidents are alleged to have occurred at or around the DK house at 17 Franklin Street.

SUNY Geneseo was not available for comment on Sunday.

“This is yet another example of a student coming forward about a physical altercation at the DK house,” said Osganian. “It’s disturbing. This seems to be a problem semester for the DK’s.”