GENESEO – Village Police Chief Eric Osganian presented the Village Board of Trustees with a written document communicating the department’s policy for traffic stops where the driver does not have an I.D. that the Geneseo Police Department can verify.

The earliest that the Board could formally approve this policy is May 1, their next meeting. The policy is closely modeled after that of the Livingston County Sheriff’s Office. It says that if an officer stops a driver whose identification cannot be confirmed, the officer will consult either the sergeant or the chief to decide whether to call a partnering law enforcement agency to verify the I.D.

“The proposed policy is that if we cannot confirm a driver’s identity we will consult with a partnering agency, be that local, state or federal,” said Osganian. “This would not limit our officers to contacting the Border Patrol in this scenario.”

The Police Department took intense heat from protesters at the scene of a traffic stop on March 24 and in the following days. Outspoken critics, including Village Trustee Mary Rutigliano, said that the officer should not have called the Border Patrol to verify the authenticity of an unstamped Guatemalan passport, which led to Border Patrol agents detaining two women.

“We want to keep our law enforcement partners,” said Osganian. “With fake bills, we call the Secret Service. With passports, the Border Patrol are going to be the experts on that.” 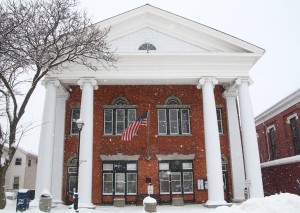