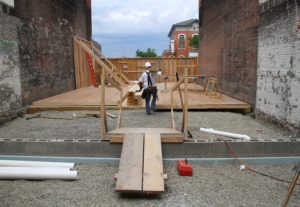 GENESEO – The Geneseo Police Department has returned all of the property that was stolen from the work site at Kelly’s Saloon on the night of June 30.

According to Geneseo Police Chief Eric Osganian, the apparent perpetrators are Benjamin Rafte, 22, of Webster, and Tucker Jensen, 23, of Phelps. Site manager and contractor Phil Deiter declined charges for both young men and both were released.

“Neither are being criminally charged, but we were happy to bring the investigation to a positive conclusion,” said Osganian.

Geneseo Police say they located the two men based on a community tip.

Work continued steadily at the site after the thefts and vandalism. The duo are thought to have flipped a work table and discarded a knife used to cut sandwiches. The knife was found on the ground across the construction site from its usual place in a work bench.

Additional video surveillance has been set up in the area, and Geneseo Police periodically check the area on foot.

Progress has been steady at the work site since breaking ground on May 23. The entire basement is now complete and construction has begun on the upper structure.

Sarah Deiter, owner of Kelly’s Saloon, hopes to open for business by the end of the year.