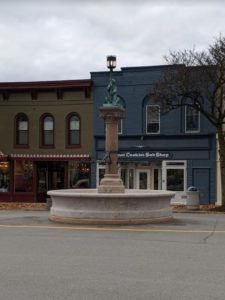 The Geneseo Bear Fountain has been struck by another vehicle, this time on Sunday night, May 9, at about 7 p.m. when a truck driven by David Ott, 58, of Warsaw, pulled off Center Street and hit the fountain head-on rather than going around it, causing enough front end damage that his truck had to be towed.

According to Geneseo police chief Eric Osganian, the driver was not seriously injured, but was charged with failure to obey a traffic control device. The fountain has a few more scratches on it than it did when it was hit on April 26 and  March 29 of this year, but overall is still in good shape. In the first recent case, on March 29, a Subaru hit the fountain turning left off Center St., and on April 26, a Geneseo resident was turning left off Center Street talking to a back seat driver, when the driver hit the fountain head-on, rather than going around it.

The fountain has been a symbol of Geneseo, since first constructed there by the Wadsworth family in the 1890’s for use as a horse-watering trough in pre-automobile days.  However, over the decades, it has become an iconic symbol and historic landmark in Geneseo. A few years ago, the rose granite fountain with the bear atop it, which had occupied the same spot for over 100 years was hit by a truck, and part of the fountain was smashed off.   Funds were raised to rebuild the iconic “bear” fountain, so named because of the bear statue that has sat atop it since it was first installed well over a century ago.