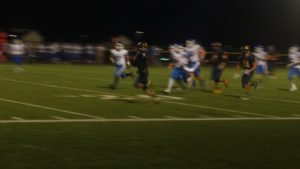 Perry RB Austin Croll rushes by the Geneseo defense for his first of two TDs in the game. (Photo/Sam Cooper)

PERRY — The Geneseo Blue Devils narrowly escaped a Perry/Mt. Morris Yellowjackets comeback on a clear Friday night, winning the road game 14-12 and leveling their record at 1-1 on the season. The Geneseo win follows a 28-8 season opening loss at the hands of Avon last week.

But what made the difference between last week’s loss and this week’s win?

“Well, we didn’t have eight turnovers”, said Geneseo head coach Tim Dolgos. “We still had two, so we have work to do. Our goal was to be 100 percent efficient on offense, meaning no turnovers and to finish scoring drives. That we didn’t do, but we took care of the football much better than last week.”

The Blue Devils scored all 14 of their points in the second quarter. The first scoring drive came on a 60-yard rushing touchdown by Junior runningback Jake Laidlaw. The two-point conversion was good, giving Geneseo an 8-0 lead in the early second quarter.

Perry/Mount Morris almost immediately answered on a 50-yard TD from junior RB Austin Croll that narrowed the lead to two points. But the Blue Devils quickly stormed back down the field, as a receiving TD by WR Kyle MacDonald put the score at 14-6 going into the half.

Both offenses were stagnant for the majority of the second half, until the Yellowjackets gained significant ground on their last possession in the final four minutes. With just over a minute left, QB David Post connected with Austin Croll on a near-30-yard pass for a TD to make the score 12-14. But just seconds later, an incomplete pass on the two-point conversion attempt sealed the win for Geneseo.

The Blue Devils will play their first home game of the season next Friday, as they host Warsaw/Letchworth. The 0-2 Yellowjackets will hit the road to take on Canisteo-Greenwood. 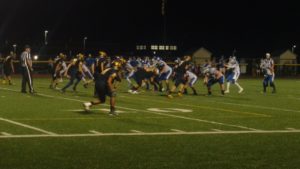 more from BIBLE UNIVERSITY - 1 week ago

more from LeRoy Little Ones - 3 months ago