GENESEO – The Town Board plans to resolve the debate over whether to lower the fee for the public to rent the large pavilion at Long Point Park.

The Board discussed their positions on reducing the fee for 40 minutes at their monthly meeting on March 9 but took no formal action. Currently, the fee for town residents is $300. Non-residents pay $525, plus a $100 security deposit.

“Most of the parks charge $50 to use pavilions,” said Councilwoman Patti LaVigne. “You could get a pavilion up on Lake Ontario on the shoreline for $200. We charge $525 for non-residents. I know personally if I looked at that, I would be thinking of going over to Mount Morris where I could get it for free, or a county park.”

“I look at the park as a liability to the Town and we should try to recoup costs wherever we can,” said Councilman Matt Griffo. “The service that we provide with the lifeguards is part of a revenue that we receive to offset that cost.”

LaVigne said that 15 people paid the fee to rent the pavilion in 2016. She said that this represents very few of the people who live in and around Geneseo, adding that Long Point is ‘an outlier’ compared to the fees of surrounding parks.

Town Supervisor William Wadsworth explained why the price stands where it does today.

“Part of that conversation when we did this was that people were renting to marry there. As a fee, $500 was a low number for that type of use. If we were to open the doors and say anybody can come down here and do anything, the neighbors would be contacting us right away with problems.”

Wadsworth introduced the idea of charging a ‘recreation fee’ to developers, which municipalities sometimes do to offset park costs. If instated, the new recreation fee could allow the Town to lower the fee at Long Point.

“I think we should look into the recreation fee and see what that might mean to us,” said Wadsworth. “I really think that is an important piece because it will offset some costs having to do with recreation and the fee can provide to the citizens of this community a park at a lower rate.”

LaVigne said that lowering costs could encourage more pavilion rentals, more park use and ultimately make the Town more money. Town Clerk Courtney Kennedy offered her experience with one non-resident as an example of how this could be true.

“Just two days ago I had someone call and ask how much it was to rent the pavilion,” said Town Clerk Courtney Kennedy. “I said ‘$525’ and she was taken aback by that but then she said ‘It’s my daughter’s graduation, I want her to have this for her, she loves Long Point.’ But when I told her there was also a $100 security deposit, that was it. She walked.”

“Think of a big gathering like a graduation where the parking lot is full,” said Griffo. “Do we really want that every weekend?”

“I wouldn’t have a problem with that,” said LaVigne.

“I do,” said Griffo. “The original intent when they purchased the property was to make it a passive park, a place for quiet enjoyment. It wasn’t so much about the pavilion and big events and parties.”

The Board plans to make a final decision on the matter at their meeting on April 13. 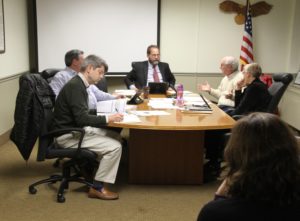 The Town Board discusses. (Photo/Conrad Baker)