GENESEO — The Geneseo Village Board approved a preliminary 2017-18 budget Monday night in addition to discussing some potential ideas for generating future revenue without affecting the tax rate, including possibly charging a fee to use Village Park.

While the budget will not be finalized for another month, Mayor Richard Hatheway opened the discussion by calling the draft budget ‘flat as flat can be.’

“The major increases are simply with salaries, and those are preexisting negotiated agreements,” said Hatheway.

Looking to the future, the board also explored some new sources of revenue. For example, Mayor Hatheway suggested the potential for charging a fee for the public to use the Village Park or recreation fees for builders when they build new structures.

“In the past we have not charged for use of Village Park, but now with bathrooms going in there and increased maintenance costs, there seems to be some justification that for people who want to reserve the park, we charge,” said Hatheway.

The new home recreation fee, implemented in the mid ’90s, has stayed flat at $400 for over a decade. When new homes are constructed in the community, those homeowners pay a one-time fee towards the village for maintenance of parks and sidewalks.

The last suggestion made was the possibility of increasing water tap fees. All discussions regarding user fees were preliminary, with no future discussion dates set in stone. The village budget, which could still be modified for the next few weeks, is expected to be finalized on April 17, 2017. 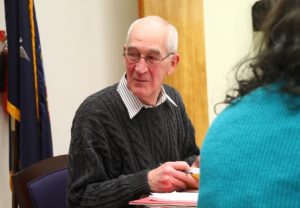