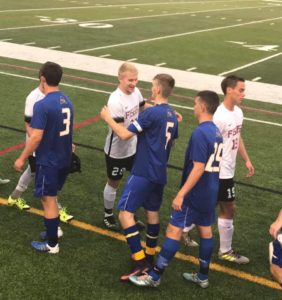 PITTSFORD — Two former Geneseo Central School teammates who are competing in collegiate soccer met up for the final time as opponents.

Jake Vattimo and Brian Rollins grew up playing soccer together at Geneseo Central School where they won three Section V titles. They continued on with their soccer careers where Vattimo plays for Alfred State Pioneers (2-6-1) and Rollins plays for St. John Fisher Cardinals (6-3-3).

“I’ve been playing soccer with Bryan since elementary school. Growing up, we always competed against each other and thats what helped us become so successful,” said Jake Vattimo. “Whenever we meet up at the college level, it always motivates me to work harder in the weeks of practice before the game. That’s the magic when you combine sports, friendships and rivalries.”

Now both in their Senior year of college and respective team captains, Rollins has dominated the matchup, where the Cardinals have outscored Alfred 15-0 over four matches.

“Playing soccer at Geneseo along side of Jake were some of the best memories I’ve had playing sports,” said Rollins. ” Playing against Jake’s Alfred State soccer team every year had a different feel to it than any other game I’d played in my soccer career. Personally, when it comes to competing, I usually bring a pretty serious attitude to a game and tend to not have a very friendly persona. However, the game vs. Alfred State had a more light-hearted atmosphere to it every year knowing it was another chance to play on the same field as Jake.”