GENESEO – For several days now, Geneseo Central Schools has been investigating rumors of a school shooting threat that are now all considered unfounded.

Geneseo Central ended their investigation there. However, social media posts started building momentum Monday morning with further talk of a possible school shooting and a possible threatening message sent to the school.

“Yesterday morning a rumor started that there may have been a threatening text message, email or Facebook message sent to the school,” said Hayes. “We investigated, the Geneseo Police Department investigated, and both found that the school did not receive any threats.”

That was when Hayes decided to put our a robocall and email to the district advising that the rumors of a threat had been investigated and were unfounded.

“We were sensing that this was starting to take on a life of its own,” said Hayes. “The message we wanted to get out was that this particular case has been investigated and there was no threat received by our school.”

Though these rumors are considered unfounded, Hayes still asks anyone who hears or sees anything suspicious in the future to contact the school or the police.

“When we get reports, we investigate,” said Hayes. “We and the Police Department do our due diligence to keep this school safe. If you see something, say something. We want our students and parents to let us know. We want to know.” 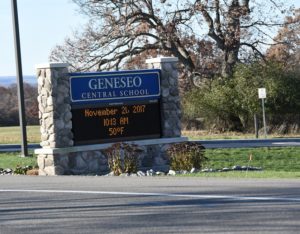