Some of the larger and newer aircraft had to launch from the Rochester airport because rain had soaked the turf runway at Geneseo, but a few clouds and soft ground didn’t stop the airplanes from pulling fancy maneuvers and wowing the crowds of every age. The airshow continues Sunday, starting at 11 a.m.

This year, the Misty Blues all-women skydiving team was on hand to jump.

Because the team doesn’t have their own airplane, they are always humbled to hitch a ride with such a historic plane as the Museum’s C-47, Whiskey 7, which flew into Normandy on D-Day and famously returned to that battle ground in 2014.

Scott Yoak from Nevada flies the show circuit, and although most people think it’s a glorious and fun life, it’s also a lot of hard work. For roughly every one hour of flight there are eight hours of maintenance. His P-51 Mustang, ‘Quicksilver,’ is a special homage to US veterans. It is one of 156 P51’s left flying today of the 15,786 that the United States produced.

The crowds always include kids pointing and asking questions. Twins Aiden and Owen, 7, came up with their dad from Pittsburgh. When asked what he liked best about the airshow, he said, “taking pictures is kind of my thing” as he held firmly onto his plastic digital camera with a smile.

The National Warplane Museum on Big Tree Lane has hosted their airshow for 37 years.
As always, a World War II encampment was established with period-correct clothing and actors for attendees to walk through.

“Our special focus on women this year is another way we can encourage young women to explore career opportunities within the aviation field, whether it be commercial, civilian, or military affiliation,” said Austin Wadsworth, President of the National Warplane Museum.

As the Saturday evening clouds gave way to beautiful sunshine, the hangar began to fill with people for USO Swing Dance.
A full show is planned for Sunday. Check the schedule at www.nwmairshow.com 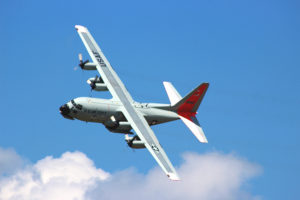 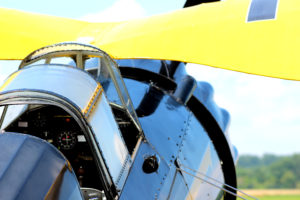 The cockpit view of a bi-wing waiting for the open sky. Photo / Zach Morin

A low pass by this airplane was loud and fast. Photo / Zach Morin