According to a press release from GCC, the facility forms the new ‘front door’ of the main campus. The two-story facility is 18,478 square feet and connected to the existing college though a second story bridge that goes into the Conable Technology Building. It is centrally located on the main Clock Tower Plaza, and creates a new ‘quad’ with the other existing buildings.

“The Student Success Center is truly a transformational opportunity on so many levels,” said Dr. Shelitha Williams, GCC’s Associate Vice President for Student Success. “On a personal level, the success coaches will guide new or returning students through their academic journey to their own individual success. At the college level, Genesee Community College is once again embracing educational innovation and making it part of our everyday process. As GCC celebrates its 50th Anniversary, we are also setting the stage for the next half century of going ‘beyond expectations’-which actually started when the college was founded in the mid-1960s.”

Through the Student Success Center, Genesee Community College introduces its new student success coaching model which provides efficient enrollment and student services with a new level of intentional engagement that is focused on students’ academic and personal success. College officials anticipate that this new program could become a model for the nation in helping students complete their degrees and achieve academic and career success.

GCC’s seven professionally trained success coaches are assigned students in areas of targeted academic interest as well as demographics. Each coach will work with students from the first stages of admissions, through advisement, enrollment and registration, financial aid and assist with student accounts all the way through to their graduation and commencement.

The Student Success Center has its own website, available here.

Anyone interested in discussing their career and academic aspirations can set up a personal appointment by calling a success coach at (585)345-6805. The fall semester starts Aug. 21 and many financial aid opportunities can still be explored.

Genesee Community College is one of the only community colleges in the nation that was established through a citizen’s group that campaigned throughout the community for the creation of a junior college. To the surprise of the town supervisors, the public referendum easily passed in 1965, and when the College opened its first doors in 1967 three times the number of students expected enrolled for classes.

The other project at the Batavia Campus nearing completion is the 56,000 square foot Richard C. Call Arena located on the west side of the Batavia Campus. This free standing field house will soon be the largest open, flexible floor space in the GLOW region (Genesee, Livingston, Orleans and Wyoming Counties). A second building is attached to the Call Arena through a common lobby and concession area and will feature classrooms, coaches’ offices, a fitness center, meeting rooms and a press box overlooking the Turf Field. Occupancy for the $13.8 million Call Arena is targeted for later this summer.

Together, both facilities will accommodate more than 65 staff members who currently work in the main building. A second phase of planning and renovation will be to transforming the vacated office space in the existing main building into new classrooms, laboratories and offices in the coming year under a separate plan. 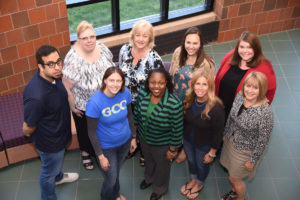