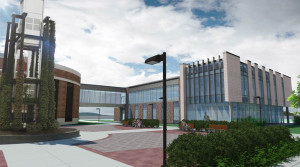 NYLON — Genesee Community College (GCC)’s board of trustees has approved the award of various construction bids for two capital construction projects on the Batavia Campus.

According to a press release from GCC, the two projects will be construction of the Student Success Center and the Event Center, and the combined cost estimate is $21,476,070.

Allied Builders, Inc. from Brockport will contract for general construction at $10,627,000.

DiFiore Construction, Inc. from Rochester will contract for site improvements at $2,322,100.

Thurston Dudek LLC from Ontario will contract for plumbing and fire protection at $955,400.

For the Student Success Center:

Leo J. Roth Corporation from Webster will contract for HVAC construction at $550,000.

Hewett Young Electric, LLC from Rochester will contract for electrical at $540,000.

For the Event Center:

Landry Mechanical Contractors from Caledonia will contract for HVAC construction at $1,337,884.

Suburban Electric of Albion, Inc. from Albion will contract for electrical at $1,318,000.

The 18,478 square foot Student Success Center will be a two-story facility connecting to the existing Conable Technology Building through a second story bridge. The one-stop service center for students and community residents will soon provide admissions, financial aid, academic advisement, job and career counseling and a variety of other services in one building. The estimated cost of construction of the Student Success Center is $6,687,645.

The two-story Event Center will be the first facility on the original Batavia Campus grounds not connected to the Batavia Campus main buildings. Located adjacent to the Soccer and Lacrosse Turf Field at the far west side of campus, the 56,614 square foot facility will include the largest open public space in Genesee, Livingston, Orleans and Wyoming Counties. The large arena will accommodate an array of athletic competitions as well as civic, community, trade, industry and official college events. The new facility is expected to draw as many as 500,000 visitors to the campus each year. The estimated cost of construction of the Event Center is $14,788,425.

The college has scheduled an official groundbreaking ceremony on Thursday, April 28 at 4 PM. The targeted construction schedule for both projects is April 1, 2016 through June 1, 2017.

In order to attract as many local firms as possible, the construction bid packages were bundled in five segments for Site Work, General Contracting, Electrical, Plumbing/Fire Protection, and Heating, Ventilation and Cooling (HVAC). Contractors were invited to bid on singular projects or a combination of both projects. Forty-seven bids were received and publicly opened on March 8, and seven contracts were approved on March 14 by the board of trustees.

Architectural renderings for the two buildings are provided by JMZ Architects and Planners.