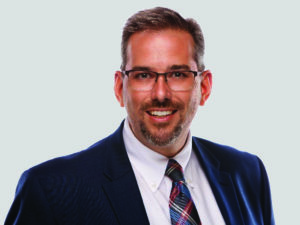 On Saturday, May 21, 2022 at 1:00 p.m., Genesee Community College will recognize its graduates during its 54th Commencement Ceremony, taking place at the Richard C. Call Arena. Honoring this group of deserving achievers, will be keynote speaker, Daniel Ireland, GCC Alumnus and President of United Memorial Medical Center in Batavia, NY.

“I am honored to have been invited to speak at GCC’s 2022 Commencement,’ Mr. Ireland said. “The perseverance of GCC students who have completed their studies during the COVID-19 pandemic is very inspiring. I cannot think of a greater privilege to speak to them on this momentous occasion, and it is interesting that this commencement is exactly 30 years from when I humbly crossed the stage for my own GCC graduation with my Nursing Degree.”

Dan completed his Associate Degree in Nursing from Genesee Community College in 1992, a Bachelor’s Degree in Nursing from SUNY Brockport in 1994 and received a Master’s Degree in Business Administration from Rochester Institute of Technology in 1997. He is also a member of the Leadership Genesee Class of 2006 and recipient of Buffalo First’s 40 Under 40 award in 2007. In January 2013, he became Fellow of the American College of Healthcare Executives (ACHE), the nation’s leading professional society for healthcare leaders. Dan was also named to 2018’s roster of Health Care Champions, by Buffalo Business First, signifying his high levels of accomplishments within the field in Western New York. Dan continues his commitment to lifelong learning as he is enrolled in the Doctorate of Healthcare Administration program at Lake Erie College of Osteopathic Medicine.

Entering his 32nd year at United Memorial, Mr. Ireland spent much of his clinical career in emergency medicine, clinical informatics, quality and Clinical leadership roles. In 2010, Dan was promoted to Vice President of Operations/Chief Operating Officer. As Vice President of Operations, he was responsible for oversight and project management of the surgical and front entry construction project, a major Maternity unit renovation, and the revitalization of the Jerome Center Diagnostics facility. In November 2013, he was promoted to President, leading United Memorial through its merger with Rochester Regional Health in 2015 and through its response to the COVID 19 Pandemic.

Additional commencement information can be found at https://www.genesee.edu/home/events/commencement/.