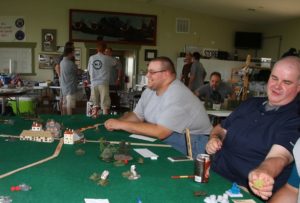 GENESEO – It’s August, 1945. An American Sherman tank stumbles along a muddy ditch on the peninsula of Normandy and rests its sights on a German Tiger tank, firing a shell at its hulking face. The German tank goes up in flames, and the Americans take another toehold in the march out of Normandy to the rest of France.

A hand reaches down and puts a blob of cotton, painted with dabs of red, signifying fire, on the one-inch-tall German tank. The players, safe in the visitor center at the National Warplane Museum in Geneseo, sip their sodas and ready their dice for the next turn. This is the latest meeting of Wargames Among Warplanes, where players enjoy a pleasant afternoon but also steep themselves in the history behind the games.

“It’s the adult version of pushing your army men around and going ‘pew pew,’ sure, but it’s a social thing, and I always walk away knowing something I didn’t before,” said Boe Langless. “The games are sometimes turn-based and combat-based but different games can follow many kinds of rules. Some are set in World War II, you see they have one re-enacting a D-Day battle over there, but some are spinoffs of real history or total fantasy, like this one about King Kong.”

The dozen or so gamers at the National Warplane Museum represented what is left of a once-booming miniature gaming culture in Rochester. In the 1960’s and ’70’s, this was the most popular type of gaming out there. But with the advent of computer games and now video gaming consoles, miniature gaming has dwindled.

“It takes a lot of time,” said Langless. “How do you paint the facial expression on a tiny figure? With a tiny brush! I’m pretty proud of my work but know a lot of guys who do really incredible work, way better then this.”

For many of the players, miniature gaming seems to be an opportunity to enjoy the vivid detail of the game and the powerful real stories that underlie them. Players frequently broke into conversations about the very real sacrifices that military personnel made to serve their countries.

“Anyone who tangled with German tanks was incredibly brave,” said Gary Comardo, overseeing the miniature Normandy tank battle. “The Germans had much better designs, better armor and bigger guns. The Allies won with numbers and air power. Sherman tanks were a simple and cheap design, and the Americans had more of them. The Americans won this particular battle, in August 1945, because of an effective air strike. In this game, the Americans called the airstrike but it hasn’t come yet, and they’re hanging on by the fingernails. Games don’t always pan out like the real battles.”

The gamers donate all of their ticket sales to the National Warplane Museum. They said that they love the games, but there is a reason that they like to play at the Museum.

“For me personally, the point of playing here is to get people to come down and participate, check out the games, maybe play one, then take a break and see the museum,” said Langless. “The museum is the real thrill. This is only our second year doing this, and we already have a way, way better turnout than when we started.”

The group posts event details and updates on their Facebook page here. 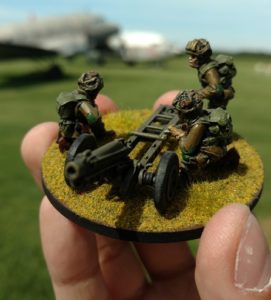 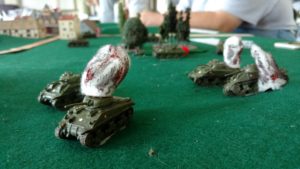 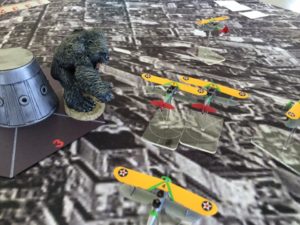 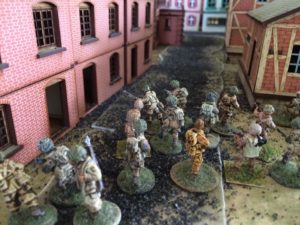