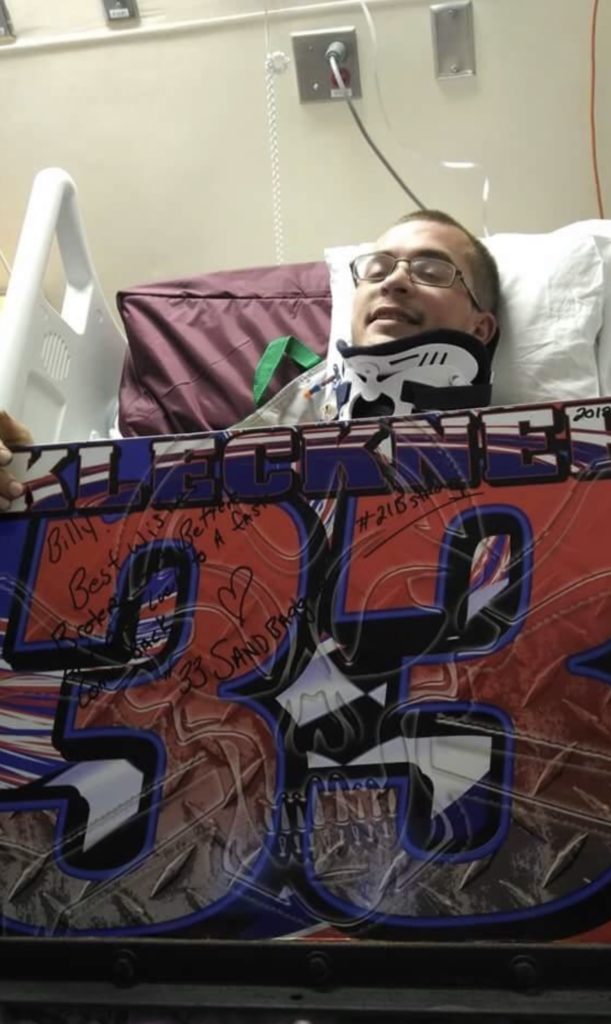 CANANDAIGUA — Family and friends of Billy Bradley Jr., who was injured July 28 in a demolition derby crash on the final day of the 2018 Ontario County Fair, are putting together fundraisers to help him with expenses as he recovers from the serious injuries he suffered.

Sasha Merritt, a cousin, said the accident occurred about 45 seconds after the first heat when Bradley was backing up on the track and collided with another driver who was going forward.

She does not know how fast the other driver was going, but said Bradley related the last time he looked at his speedometer, it read 50 mph.

“Billy flopped forward and all the EMTs (emergency medical technicians) rushed over after everybody started screaming he was hurt,” Merritt said.

Sgt. Michael Rago of the Ontario County Sheriff’s Office said the other vehicle struck the rear driver side corner of Bradley’s vehicle, a Chevy Cavalier.

He said the accident happened around 8 p.m. — about an hour after the event started — and Bradley was transported by East Bloomfield Ambulance, standing in at the fairgrounds for Canandaigua Ambulance, to the infield where he was picked up by Mercy Flight and taken to Strong Memorial Hospital with back and neck injuries.

Casey Kunes, president of the fair board of directors, said emergency crews are always on site and at the track during all fair events at grounds off County Road 10.

“They were able to administer medical attention,” he said. “They determined it might be best to bring in Mercy Flight.”

Merritt said there is no guarantee, but that doctors are encouraged by his progress, which has moved faster than expected. She said they’re not able to tell a lot in the first three weeks to three months.

“As of now, he cannot walk, but he is not paralyzed,” Merritt said. “There’s been no diagnosis of paralysis so far.”

Merritt said Bradley’s neck was broken and between eight and 10 vertebrae in his back were fractured. She said doctors put a cage in his neck and removed bones that were pushing on his spinal cord.

During another surgery Monday, Merritt said two metal rods were put into his back and fused with the neck cage.

“He’s not leaving the hospital anytime soon, but they didn’t think he’d leave ICU as quick as he did,” Merritt said.

“He’s a lucky man to make it out of the mess like he did,” said Bradley’s best friend, Joe Rast, noting Bradley’s 27th birthday was Thursday. “Demolition derbies are what he waits for all year. It’s his favorite thing to do, besides work.”

Merritt said Bradley has been derbying since he was like 14 or 15 years old.

“This is an every-year thing,” she added. “The whole family does it.”

She said Bradley, a father of four, has been injured before, but nothing major like this. The accident happened in front of his children, ages 5, 6, 7 and 8.

“He actually made the comment that he’s never broken a bone before and now he did and he went big,” Merritt said. “He keeps telling us he’s going to get back on the track, but I think that’s his motivation.”

It was her 9-year-old son Blaine Bradley who came up with the idea to create bracelets. She said he collects bracelets for fundraisers.

“He said we should do bracelets and help uncle Billy,” Merritt said, describing the design in hot pink, Bradley’s favorite color, inscribed with 21B Strong, a nod to his favorite number, also designated on his car. Decals, featuring two derby cars colliding, have also been commissioned with a hot pink tire and #21BStrong.

Merritt, working with other family members — including Bradley’s ex-wife, Jessica Bradley, who has been at the hospital every day, and his fiancé, Holly Tallbot — are in the process of setting up a public fundraiser on social media.

A spaghetti dinner is also planned for Aug. 25 at the Canandaigua Moose Lodge and another cousin, Tanya Thompson, wants to do a chicken barbecue.

Check back next week for details on possible fundraisers and where to get bracelets and decals in support of Bradley.