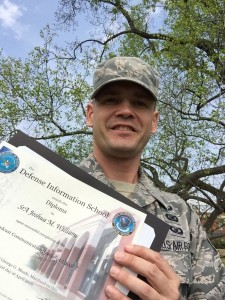 Well, today is the beginning of a new chapter for myself, my family, and the GeneseeSun.com. I leave the Department of Defense Information School (DINFOS) as a graduate of the Broadcast Communications Specialist Course.

Now, in addition to my work at the GeneseeSun.com, I have the honor of telling the stories of the sons and daughters of our nation who are defending our freedoms.

I will still be assigned to the 914th Air Wing in Niagara Falls. I couldn’t be more fortunate and grateful to the leadership there who made this opportunity happen.

The school consisted of radio broadcasting and production, video production, news casting, and public affairs, all squashed into 5 months. I’m going to be honest. Going into this school, I thought it would be a piece of cake. I was absolutely wrong. Apparently, we in western New York pronounce our ‘A’s’ funny, and while producing radio shows I had a tough time not smacking the buttons.

I made it through though. I had to grind out extra hours at the school, but I survived. I’d like to think that I challenged the instructors as much as they challenged me. But probably not.

Part of the issue is that I felt an obligation to succeed in this school. My fiancée, here in Geneseo, had to work a full-time job and care for our now 1-year-old daughter, and family stepped up and helped enormously. Conrad Baker ran the GeneseeSun.com essentially as a one man band, and ran circles around any other local news source in Livingston County. There not many 24-year-olds who work as hard as he has over the last 6 months. For him, it was a period of tremendous growth and accomplishment. Conrad is the co-owner of the GeneseeSun.com, and I could not be more proud of the effort and results he’s delivered. In truth, he’s a better newsman than I ever was – and he’s just getting started.

Many of us older folks often scratch our heads and are critical of this younger generation, but one of the things I’ve learned in this period is that there are some amazing, passionate citizens out there doing great things. We are seeing local sons and daughters volunteering to serve in our military, and elected officials serving in their ways. They are passionate and care greatly about our community. That’s actually the greatest takeaway from this school for me. The potential and talent of the next generation is mind-numbing. Some of my classmates were fresh out of high school, and they picked up concepts and editing techniques that seasoned professionals still struggle with. The talent and passion of these young Americans leaves me in awe of what our nation is capable of.

Historically, businesses and families would survive during times of war as entire generations would be off in some foreign land fighting to protect our freedom. Those who served are all heroes, but equally great are those like the farmers and families who stayed home and kept things running. A community is more than bunch of houses lined up in rows. A community is a family that is there to support each other not only in the good times but in the hard times too.

I’m back in town now – but I’m going to be laying low for a little while. There’s this beautiful little 1-year old at home that I’m looking forward to getting to know.