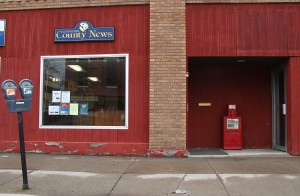 Be sure to take our poll below. The poll will close at 7 p.m. on Sunday, April 3.

This week’s print edition of the Livingston County News left Geneseo developers Don Livingston and Jim Sullivan scratching their heads as to why their names were included in a news story about ‘drug trafficking’ in the Village of Geneseo.

Their names appeared in a Livingston County News article titled “Cops Seize Drugs, Cash in Geneseo Raid” in their newspaper and “Task Force Nets Three in Geneseo Drug Trafficking Ring” on their website as the ‘owners’ of Palace Properties, which owns 3 Center Street, where a college student was arrested for allegedly possessing marijuana, hashish, liquid THC capsules, Adderall and Xanax, and THC-infused gummy bears and candy. People have been interrupting Livingston and Sullivan as they work tirelessly on renovations of their new business in the Village, asking what is going on in their apartments.

“I want to know where responsible journalism comes into this,” said Livingston. “Jim and I had nothing to do with what was going on in that apartment but our reputation was smeared. Short of living with them, or going into their rooms every day, we have no way of knowing what the tenants are doing.”

“My dad doesn’t advertise, he just goes by word of mouth,” said Katie Sullivan. “Now this is the word of mouth about my dad. It’s not fair and hurts his business.”

Livingston and Sullivan have unquestionably contributed to the Geneseo business district by repurposing the Palace as commercial and professional space, and beautifully restoring the Riviera, which is now a destination for moviegoers and host to big-house community shows and events. Now, they are hard at work constructing Intermissions, their new bar, at 8 1/2 Center Street. Eventually, they plan to build an Italian restaurant at 6 Center.

Furthermore, Don Livingston said that the Livingston County News could not have learned that he and Sullivan are ‘owners’ of Palace Properties from tax records as their newspaper claims:

“According to Livingston County property tax records, the apartment where the trio were arrested at 3 Center St. is owned by Palace Properties, a limited liability corporation that is owned by Don Livingston and Jim Sullivan,” says the ‘March 31’ edition of the Livingston County News, which was released on Wednesday, March 30.

“Palace Properties is not an LLC, it is a corporation, and Jim and I are not the owners, we are shareholders. That is not listed in the tax records,” said Livingston. “You’re supposed to report the news, not make the news. I cannot fathom how my and Jim’s names add to the story at all besides the fact that some people might recognize us. […] If they’re going to run that story, they should run it right.”

The Livingston County News was published and publicly circulated early Wednesday morning with Livingston and Sullivan named as the property owners.

After Don Livingston confronted the Livingston County News staff at 122 Main Street in Geneseo, they updated their website to say, “According to Livingston County property tax records, the apartment where the trio were arrested at 3 Center St. is owned by Palace Properties, a Geneseo-based corporation that rents commercial and residential building space.”

You can see the GeneseeSun.com’s unedited coverage of the same incident, based on the same press release, here.