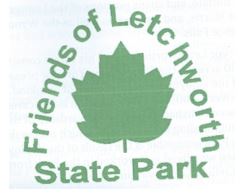 Friends Of Letchworth State Park (FOLSP) has announced the recipient of their annual scholarship, this year’s winner is Miss Allison Karasiewicz.  “We are thrilled with Allison as this year’s winner,” said Carol Rathbun, President of FOLSP.  Allison who is a senior at Letchworth Central School was awarded $1000 for her essay on describing the legacy of the Civil Conservation Corps (CCC) at Letchworth State Park and the impact their efforts will have on the future of the park and those who benefit from the model this facility presents. The presentation of the award was presented by Letchworth State Park manager Doug Kelly on May 4, 2019, at the “I Love My Park Day” gathering.

Allison was one of seven students who applied and submitted essays where they were judged on spelling, grammar, syntax, writing style, as well as the degree to which the writer addressed the topic.  “We have awarded this scholarship now for several years with a different essay topic each time relating to something in the park” said Rathburn.

The Scholarship is currently open to the schools surrounding Letchworth State Park which in include Keshequa, Letchworth, Mt. Morris, Perry, and York.