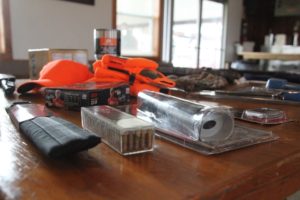 LIVINGSTON COUNTY – Dozens of Livingston County residents took to the woods in the pouring rain Saturday morning to do their best in a competition for charity that is quickly becoming a tradition in memory of a loved friend and neighbor. Far from their cozy homes, these hunters brought back as many squirrels as possible to benefit Wings Flights of Hope.

This was the fourth annual squirrel hunting tournament organized by the family of Branden Merrick, the much-loved Livingston County Sheriff’s Deputy. Branden and his wife, Deputy Carrie Merrick, tragically lost battles with cancer and are survived by their daughter, Hadley Grace, 3. A total of 74 registered hunters hit the $2,300 mark for Wings Flights of Hope, the nonprofit that pledges to fly the severely ill to a medial care facility of their choice, for free.

“My brother and I grew up outdoors hunting, fishing, cutting wood,” said Kevin Merrick. “Hunting was one of our biggest passions. Always was. To do something hunting-related means a lot, and a lot of people in this community are into it. For a lot of people, this is their last hurrah before spring turkey season and a chance to get together and give back to an organization that has done so much, so much for the family of their friend Branden.”

Merrick said that Flights of Hope eased what would have been extreme costs of taking Branden to distant medical treatment facilities.

“When we started, this was an effort to raise money to help my brother in his battle with cancer,” said Kevin Merrick. “Now it’s an effort to give back to Wings Flights of Hope because at least once a week for 2 and a half years my brother, my dad and I flew to what I consider the best cancer treatment facility in the world in New York City, for no charge. Even when we landed in New York, they had a car waiting for us. To be able to give them something in return as a thank you means a lot.”

Everything at the tournament, from the food and drink to the hunting gear and wine in the raffles is donated by local businesses, the Merrick family and their friends.

“We try to get smaller businesses that want to get their name out there to donate,” said Merrick. “Day of, all of the money goes directly to Flight of Hope.”

The tournament continues to build community interest. Every year, the tournament will benefit a different person or charity in need.

Hunters paid $35 to compete and bought dozens of raffle tickets.

A total of 36 competitors checked in 50 gray squirrels, 33 chipminks, 24 red squirrels, and 9 fox squirrels. Hunters either took their squirrels home for the pot or donated them to a local hunter and trapper, who prepares the tails to be made into commercial fishing lures and saves the meat for the table.

Anyone interested in next year’s tournament can email Kevin Merrick at kmerrick21@live.com. 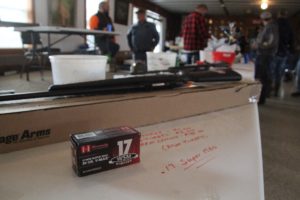 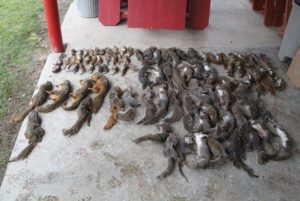 The total take, donated for tails and meat. (Photo/Conrad Baker) 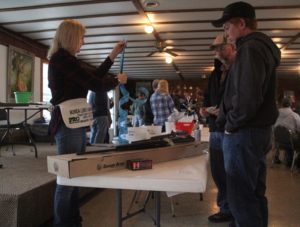