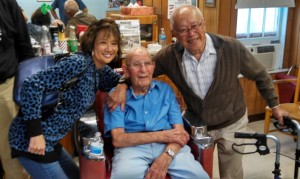 CALEDONIA – Frankie the Barber has passed away on Wednesday after cutting generations of Livingston County hair.

Frankie Antinore, 92, had as many friends as customers at his shop on West Main Street in Avon. In September 2015, he decided he would not drive anymore and closed up shop for the final time.

Antinore was a fabled hunter and fisherman who traveled to every state in the U.S. with his wife of 70 years, Marion.

Frankie served aboard a U.S. Navy destroyer in the Atlantic during World War II and Marion’s career as a travel agent took them all over the world.

He will be sorely missed by his fishing buddy, Wing Bow, 102, Navy buddy Tony Pusateri and family friend Merna Cohen.

He ran his barber shop in Avon for 69 years cutting five generations of hair in some families.

The shop’s famous vintage barber chair, which comes complete with ashtrays on the arms, will go to local resident Glenn Upright, whose grandfather, father and son have all had their hair cut by Frankie.

Friends may call Saturday from 4 p.m. to 6 p.m. at Alhart Funeral Home, 3068 West Main Street, Caledonia. Private Service and Interment at the convenience of the family. Memorials may be made to Avon Ambulance, 74 Genesee Street, Avon, NY 14414 or Caledonia Ambulance, PO Box 3, Caledonia, NY 14423.