Geese at Honeoye’s Sandy Bottom Park, and how to deal with them, has caused a social media controversy over what should be done to diminish size of the flock, which most would agree is a nuisance and health hazard. At the September 10 Richmond Town Board meeting, noting Building and Grounds’ Scott Harris had cancelled the hunt due to the social media controversy, the board passed a resolution presented by Councilman Steve Barnhoorn, that tasked the Parks and Recreation Committee, led by Liz Yockel, to address the issue of nuisance waterfowl control, investigating alternative control measures, , as well as health issues related to exposure of the droppings to pets
and people. The parks committee is to report back to the town board in March of 2020 with their recommendations, findings, and projected costs and benefits.

The September 10 town board resolution was prompted by a firestorm of Facebook criticism after the Richmond Town board voted Aug. 27 to shoot some geese at Sandy Bottom to diminish the flock and scare geese away, as they have done every year since 2015. Shortly after, a Facebook post to the Honeoye local group was initiated by Liz Yockel of the Parks and Recreation Committee, criticizing the town board for voting to shoot the geese, without having a public discussion of it first. Her initiating post garnered 174 comments of people who didn’t like that the town board didn’t have a lottery for shooting, didn’t like the idea of killing geese, didn’t think it was fair the three people named in the August 27th resolution were appointed to do it, wrongly assumed there would be shooting on the Labor Day holiday weekend, and didn’t think shooting was safe. Others took Harris to task for the way the beach was kept, even though he was raking it every morning. Due to the controversy, Harris called the Supervisor to tell her the hunt had been cancelled, and he was resigning from the Parks and Recreation Committee.

“ When I saw all those comments, it ripped my heart out,” said Harris. “I work hard to do a good job. ..I took the beating for 174 comments, so I cancelled the hunt. But the post still didn’t come down, the comments just kept coming,” said Harris. “People don’t know what we do every morning so people don’t have to walk through poop all day…my concerns meant nothing to the Parks and Recreation Committee, so I resigned from it.”  He also noted this “hunt” was nothing new; it had been happening since 2015. “But it’s not like a massacre,” he said. “We shot five geese in four years, and then they go away, at least for awhile. The beach is closed, but the hunters know not to shoot out over the
water… There were no plans to do this hunting on Labor Day weekend, even though the beach is closed, as some of the posts implied.“ Councilman Darryl Marshall reiterated that, in past years, the shooting seemed to work at discouraging geese from frequenting the beach.

A representative from Honeoye Lake Park suggested the town do what the Honeoye Lake Park beach does…put up coyote decoys. “We’ve done that,” replied Harris and some board members. Unfortunately, the coyote and swan decoys were vandalized.  “we found them in the ditch, in the lake, some were stolen, and one coyote had his legs ripped off…it’s expensive and then people just vandalize them before they do any good.”

Terry Gronwall, Chairman of the Honeoye Lake Watershed Task Force, suggested those doing the study think of it as a lake problem, rather than just a Sandy Bottom problem. “If they move away from Sandy Bottom, they will just move elsewhere on the lake,” he commented.

The new Sept. 10 resolution was introduced by Councilman Steve Barnhoorn who added, “I went down there at 2 p.m. on Saturday after reading the Facebook post, and there were 11 geese there. They left, but what they left behind sure wasn’t pretty. Scott has had an uphill battle trying to deal with this, and people should not be vilifying him for doing his job…this is not just about one thing; it’s a health issue, too,” he said.  Barnhoorn handed out copies of an article about the diseases geese leave behind in their droppings, as well as pictures for those who had not seen the mess personally.

Liz Yockel, who is also running for councilman, was at the meeting to report on the Parks and Recreation activities.  Linda Grace, town clerk, asked Yockel why she didn’t just call the Supervisor or the board if she was concerned about the shooting instead of calling everyone else and putting it on Facebook. “This could have more easily resolved if you spoke directly to the board,” she said.

“I put it there as a notice to the community kind of thing,” Yockel replied. “I think it was good to put it on Facebook,” she said. ”A community discussion came out of it…I called DEC, the USDA and several other agencies too.”

Addressing a comment made by a board member, that some of the comments were “out of line,” Yockel replied, “Well, we can’t control what people say on Facebook.”

The resolution to turn study on the issue over to Parks and Recreation was approved unanimously, and Supervisor Caroline Sauers commented, “Well, enough of Goosegate. We need to move on. “ 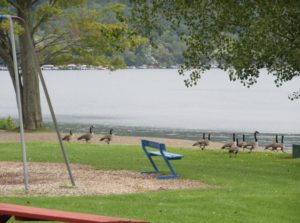 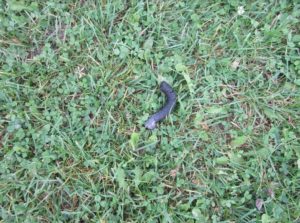