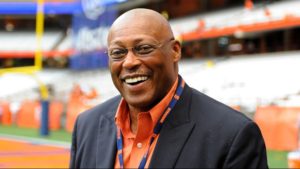 Floyd Little, a Hall of Fame running back who starred at Syracuse University and later for the Denver Broncos, died from cancer on Jan. 1 at his home in Henderson, Nev. He was 78.

Floyd Douglas Little was born July 4, 1942, in New Haven, Conn. He was persuaded to attend Syracuse by Ernie Davis, the first Black player to win the Heisman Trophy.

Mr. Little graduated from Syracuse in 1967 and received a master’s degree in legal administration from the University of Denver in 1975.  From 2011 to 2016, he returned to Syracuse as a special assistant to the athletic director.  Survivors include his wife, DeBorah; and three children.