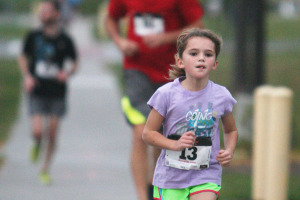 NEW JERSEY — A nine-year-old runner from Geneseo who has held local fitness and running enthusiasts in awe for years just exponentially grew her audience with Sunday’s qualifying race for the United States Junior Olympics.

Catherine Staley,a 4th grader at St. Agnes School, qualified for the Junior Olympics with a spectacular performance at the USATF regional qualifier in New Jersey where she placed 3rd out of an elite field of over 60 of the fastest 9 to 10 year olds in the northeast.

“It was fun running in a race like that with  just kids my age,” said Staley, who was enjoying the day off from school thanks to the snow storm. “Racing with kids that fast makes it more fun.”

Staley qualified for the regional race over a week ago in Letchworth State Park with a dominating performance at the USATF Niagara qualifier where she took first place, defeating Elizabeth Baroody by nearly a minute.

“Going into the race my goal was to qualify for the Junior Olympics,” said Staley who regularly wins local 5k races against regularly training adults. “The top 30 got to go on and compete in Alabama.”

Catherine’s parents Glen and Catherine have worked hard to make sure that their passionate runner doesn’t forget to be a kid.

“We try to take it day-by-day,” said her dad Glen. “This has been a good opener for her compare herself to girls her age and competitive like she is. We didn’t know how she would do it was good enough for me that she just came out of the race happy with her third place finish.”

What does a 9-year-old do on a snow day? Well for Catherine, she plans to run on the treadmill because of the weather and then go to swim practice where she is a member of Mercury Swim team.

The Junior Olympics will take place on Dec. 10 in Alabama. The Staley family plans to drive down for the meet.

Staley said her plan at the Junior Olympics is to start faster and have a good race on the national stage. Without a doubt, she will have many excited fans following her every move.

Her advice for any future fleet-footed talent following in her footsteps is, “Run so you can get better,” said Staley.” 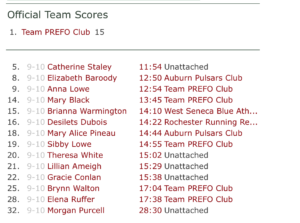 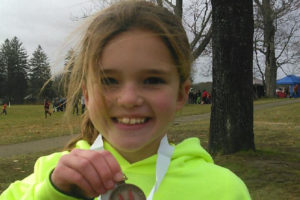