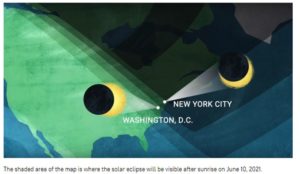 The Earth, moon and sun will align again for the second time in as many weeks to create a solar eclipse that will be visible for part of Canada and the United States — but only if Mother Nature cooperates and provides clear skies.  On May 26, the moon passed through Earth’s shadow during a lunar eclipse, and on June 10, the roles will be reversed as the moon casts a shadow on the Earth during the first of two solar eclipses in 2021.

This event will be a far cry from the Great American Eclipse of 2017 when day turned to night from Oregon to South Carolina, but it will still be an impressive show for those in its path.

The upcoming celestial alignment will create an annular solar eclipse, otherwise known as a “ring of fire” eclipse as the moon will be slightly farther away from the Earth than normal, meaning it will not quite be large enough to block out the sun entirely.

The result will be a halo of sunlight around the moon during the height of the eclipse, but this spectacle will only be visible to the remote areas of northern Ontario, far northwestern Greenland, around the North Pole and eastern Russia.

However, millions of people will still be able to see a partial solar eclipse.   Right at sunrise on Thursday morning, people across the northeastern U.S. and eastern Canada will be able to see, if skies are clear enough, more than half of the sun blocked out by the moon.

This includes metropolitan areas like New York City, Boston, Toronto, Montreal and Quebec City. People across northern Europe, Iceland, Greenland and northern Russia will also see the moon take a bite out of the sun on Thursday.

Since the moon will never completely block out the sun, proper eye protection is needed throughout the entire eclipse.

“It is never safe to look directly at the sun’s rays – even if the sun is partly obscured,” NASA warns. “When watching a partial eclipse you must wear eclipse glasses at all times if you want to face the sun, or use an alternate indirect method.”

Looking at the sun without a solar filter or eclipse glasses can lead to permanent eye damage, so safety is the top priority for viewing the eclipse first-hand