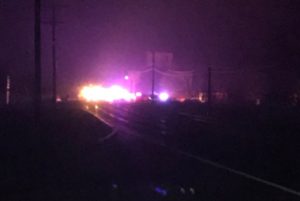 The scene at a distance. Provided photo.

LIVONIA – The Livonia Fire Department and NYS Office of Fire Prevention and Control are working to safely burn off the rest of the propane from a leaky tank that burned a mobile home Tuesday night.

According to first responders who were at the scene, leaking fumes from a mobile home’s 1,000-gallon underground propane tank ignited just before 9 p.m. and continued burning, lighting the house on fire.

“Myself and deputy chief Alexander arrived on scene and found the side of the mobile home on fire along with a 1,000 gallon underground propane tank that was leaking through the ground and the vapors had ignited and were continuing to burn,” said Livonia Fire Chief P.J. Dwyer. “One of the elderly residents was also still inside the house. The Deputy Chief entered the house and quickly assisted the woman out of the home. All of our apparatus arrived shortly after and extinguished the fire.”

Firefighters shut off propane going to the home.

“The adjacent mill was also found to have high levels of propane and the power was shut off to that structure as well as the original mobile home,” said Dwyer. “The leak was coming from the tank itself and could not be shut off so NYS Fire is responding today with some of there equipment so we can safely burn off the propane that is left in the tank.”

Dwyer thanked his firefighters for their heroism.

“They are just a great group,” said Dwyer. “It’s difficult to save a mobile home once it catches fire especially when it is on the edge of our fire district like this one. But they saved it. We had to remove some of the siding and insulation to make sure the fire was completely extinguished but they will be able to move back in again once the damaged area is repaired.” 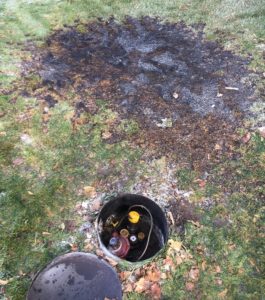