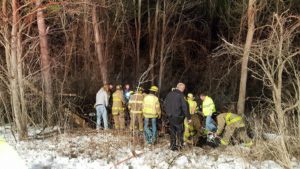 WEST SPARTA – Firefighters recovered a person who was trapped in a vehicle the morning of Christmas Eve.

According to first responders, an emergency call at 5:11 a.m. reported a one-car accident at McKay Road and Hartman Road with an occupant trapped in the vehicle.

Firefighters extracted the person and took them to a safe landing zone for a medical helicopter.

The helicopter took the patient to Strong Memorial Hospital.

Firefighters with the West Sparta and Dansville Fire Departments responded to the scene.

“Great job by all. Thank you Dansville!!!!!” posted Thomas Pearson to Facebook.