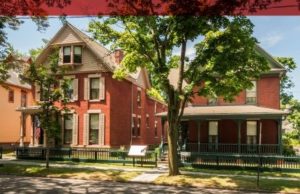 Fireighters were called at 1:10 a.m., Sunday, Sept. 26,  to the Susan B. Anthony house and museum in Rochester, with reports that the house was on fire.        When firefighters arrived, they saw that the back porch of the structure was in flames, but they were able to put the fire out before the flames damaged any of the exhibits inside the museum.  They are calling the origins of the fire “suspicious.”

The Susan B. Anthony house at 17 Madison Street is where Susan B. Anthony, nationally known for her suffrage and abolitionist work, lived for many years, and where she was arrested in 1876 for voting, at a time  women were not allowed to vote.  It was also the National Headquarters of National American Woman Suffrage Association when she was its president. She died In 1902.

Since then, her house has been a museum In Rochester, open to the public during business hours, and full of exhibits devoted to her life’s work and the times in which she lived None of the exhibits were damaged in the fire.