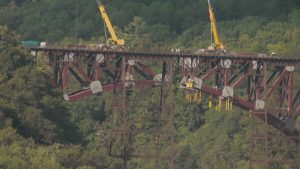 LIVINGSTON COUNTY – A final piece joined the east and west sections of the new rail bridge at Letchworth State Park on Wednesday.

Ken Wallace, one of the Park’s most passionate visitors, captured the moment that the final piece went in with a 50X zoomed shot from Inspiration Point.

There is still a lot of work to do before the bridge is operational. Work is expected to continue through December 2018.

The iconic ‘trestle bridge’ is still in operation 75 feet to the north. Sometimes visitors see trains crawl along the bridge as cranes and workers carefully work nearby.

Norfolk Southern, which owns the rail and bridge, will construct 1,200 feet of new track on either side of the Genesee River gorge to align existing tracks with the new bridge.

In May, a worker shot a heart-dropping video from the top of the construction site. You can see that video here.

You can watch 6 months of the bridge construction in 2 minutes and 11 seconds in a Work Zone Cam time lapse video here. 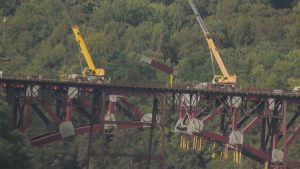