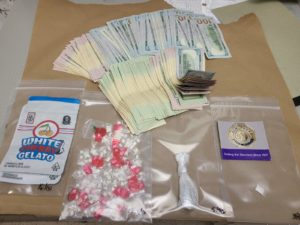 Assistant U.S. Attorney Charles Moynihan, who handled the case, stated that in June and July of 2021, investigators purchased suspected fentanyl from Richardson on three separate occasions. On July 22, 2021, investigators searched Richardson’s residence on Forsythia Drive in Chili, seizing multiple quantities of fentanyl and para-flourofentanyl, a fentanyl analog as nearly $4,000 in cash, a digital scale, and drug packaging material.  Richardson, arrested outside his residence, was found with 76 decks of para-flourofentanyl and $590 in his possession.

The United States Attorney’s Office brought the matter as part of its Project Safe Neighborhoods (PSN) initiative.  PSN is the centerpiece of the Department of Justice’s violent crime reduction efforts.  PSN is an evidence-based program proven to be effective at reducing violent crime.  Through PSN, a broad spectrum of stakeholders works together to identify the community’s modamagingsing damaging crime problems and develop comprehensive solutions to address them.  As part of this strategy, PSN focuses enforcement efforts on the most violent offenders and partners with locally based prevention and reentry programs for lasting reductions in crime.

The sentencing results from an investigation by the Greater Rochester Area Narcotics Enforcement Team and the Bureau of Alcohol, Tobacco, Firearms, and Explosives, under the direction of Special Agent-in-Charge John B. DeVito, New York Field Division.