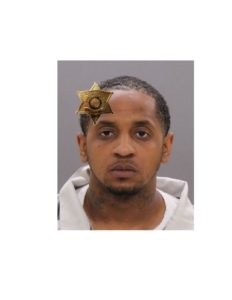 On June 3rd, 2022 at approximately 4:45 pm Deputy Cheyenne Masiello conducted a traffic stop on a vehicle on Lake
Avenue, in the Village of Lima, for a violation of the NYS Vehicle and Traffic Law. The Deputy Sheriff did approach the
vehicle and made contact with the operator, identified as 32 year old Bryant P. Carter Jr. of Rochester, NY.

A records check revealed Carter’s driving privileges in NYS were suspended, in addition to having several active warrants
for his arrest. The Deputy Sheriff then approached the vehicle again and instructed Carter to exit the vehicle due to the
active warrants. Carter then fled from the Deputy in his vehicle, northbound on Lake Avenue.

During a short pursuit, Carter operated his vehicle in a reckless manner, striking another vehicle and driving in the wrong
lane into oncoming traffic. Carter’s vehicle did become disabled on Rochester Road, in the township, at which point he
was taken into custody without further incident.

Carter was arrested and charged with Felony Reckless Endangerment in the First Degree, Unlawful Fleeing a Police
Officer in a Motor Vehicle in the Third Degree, Obstructing Governmental Administration in the Second Degree, Reckless
Driving, Aggravated Unlicensed Operation of a Motor Vehicle in the Second Degree, as well as numerous Violations of
the NYS Vehicle and Traffic Law.

Carter was transported and turned over to Central Booking Deputies at the Livingston County Jail for processing and prearraignment detention. The District Attorney’s Office was contacted in regards to bail due to the felony level charges. It
was recommended Carter be held without the possibility of bail due to having three prior felony convictions.