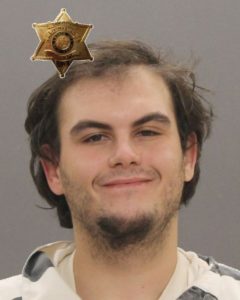 Sheriff Thomas J. Dougherty reports the arrest of a Leicester NY resident on felony weapons charges after an investigation by the Sheriff’s Office.  On December 28, 2020 Sheriff’s Investigators received information that a convicted felon residing on
Mount Morris Road in the Town of Leicester was in possession of a handgun. At approximately 5:10 pm Deputies and Investigators arrived at the residence to investigate, and spoke with 24 year old Kody J. Heerkens.

The investigation led to a search of the residence and a vehicle which revealed that Heerkens was in possession of a loaded 40mm semi-automatic pistol. Heerkens is prohibited from possessing firearms due to a previous felony conviction in August of 2017.

Heerkens was arrested and charged with Criminal Possession of a Weapon in the 2nd Degree, a class C felony, for illegally possessing the loaded firearm.  He was turned over to Central Booking Deputies at the Livingston County Jail for processing
and pre-arraignment detention as the offenses did qualify for pre-arraignment detention under the NYS Justice Reform Act. The District Attorney’s Office was contacted in regards to bail due to the felony level charge. It was advised that Heerkens should be remanded to jail with bail set at $10,000 cash or $20,000 bond.

Investigating the incident for the Sheriff’s Office were Investigator Shawn Whitford, Deputy Laszlo Babocsi and Deputy Michael Phillips. The Dansville Police Department also assisted with the investigation.  The investigation continues and additional charges are pending.