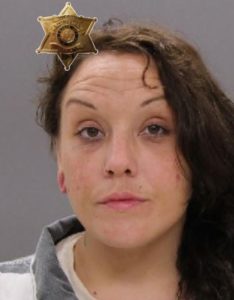 Sheriff Thomas J. Dougherty reports the arrest of a Livonia resident on a felony charge following an investigation by the  Sheriff’s Office.

On September 11th, 2021, at approximately 12:30am, Sheriffs Deputies responded to the area of 13 Commercial Street, in the Village  of Livonia, for the reported disorderly conduct.

The investigation alleges that 33 year old, Aimee K. Magorka of Livonia, was involved in argument with another female. It was later  found that out that Magorka pushed an air conditioner out of a second story window, which damaged personal property of the female  which was valued over $250.00.

An arrest warrant was filed in local criminal court. Magorka was later located on September 29, arrested and charged with felony  Criminal Mischief in the Third Degree.

Magorka was transported and turned over to Central Booking Deputies at the Livingston County Jail for processing and pre arraignment detention. The Livingston County District Attorney’s Office was contact in regards to bail due to felony level charges. It  was recommended that Magorka be held without the possibility of bail due to her having (2) previous felony convictions.