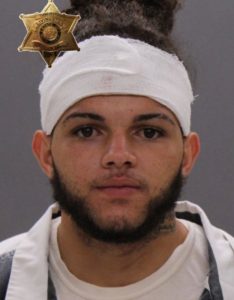 Sheriff Thomas J. Dougherty reports the arrest of an Erie County resident on a  felony charge following an investigation by the Sheriff’s Office.

On March 10th, 2021, Sheriff’s Deputies responded to the Greenway Motel on Sonyea Road in the  Town of Mount Morris for the reported domestic incident.

The investigation alleges that 19 year old, Yadiel A. Diaz-Olmeda of Buffalo NY, got into a physical  altercation with a female individual, which included punching the female in the face and damaging  personal property of the females, which was valued over $250.00.   Diaz-Olmeda was arrested and charged with felony Criminal Mischief in the Third Degree and  Harassment in the Second Degree.

Diaz-Olmeda was transported and turned over to Central Booking Deputies at the Livingston County  Jail for processing and pre-arraignment detention. The charge did qualify for arraignment due to the  victim requesting an order of protection against Diaz-Olmeda, however, the Judge cannot set bail  under the NYS Justice Reform Act.

Diaz-Olmeda was later arraigned at the Livingston County Centralized Arraignment Part (LC-CAP) at  the Livingston County Jail before Town of Groveland Justice Mark Bean. The Judge did issue an  order of protection and released Diaz-Olmeda on her own recognizance (ROR), per the law, to return  to Mount Morris Town Court at a later date and Deputies did set him free.