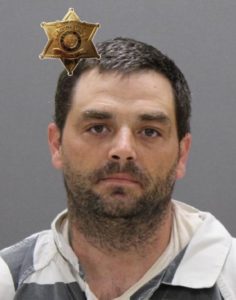 Sheriff Thomas J. Dougherty reports the arrest of a Steuben County resident on a  felony charge following an investigation by the Sheriff’s Office.

On April 18, 2021, Deputy Michael Telesca responded to Franklin Plaza in the Village of Dansville, for  the reported violation of an order of protection.

The investigation revealed that 39 year old Christopher J. Parsons of Arkport, had been contacting a  female individual who was a protected party in an active complete stay-away order of protection  placed against Parsons.

A records check also showed that Parsons had been previously convicted of Criminal Contempt in  the Second Degree within the last five years, making this court order violation a felony.

Parsons was arrested and charged with felony Criminal Contempt in the First Degree.

Parsons was transported and turned over to Central Booking Deputies at the Livingston County Jail  for processing and pre-arraignment detention. The District Attorney’s Office was contacted in regards  to bail due to the felony level charges. It was recommended that Parsons be held on $3,000 cash or  $6,000 credit/secured bond.

Parsons was later arraigned at the Livingston County Centralized Arraignment Part (LC-CAP) at the  Livingston County Jail before Town of Caledonia Justice Mark Riggi. The Judge did remand Parsons  to the custody of the Sheriff, setting bail at $3,000 cash or $6,000 credit/secured bond.