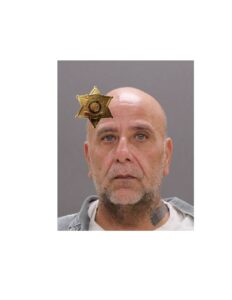 On November 29th, 2022, at approximately 5:00 pm, Sheriff’s Deputies met with an individual at the Sheriff’s Office HQ
in Geneseo, who wished to report a possible violation of an order of protection.  The investigation revealed and alleged that 50-year-old, John Rosario of Henrietta, had been contacting a female individual who was a protected party in a complete stay-away order of protection placed against Rosario. The current mandate of protection was issued out of Livingston County Court in September because Rosario previously violated an order of protection, which was in place to protect the same victim. Rosario had been previously convicted of Criminal Contempt in the First Degree in June of 2022, making this arrest a felony.

On November 30th, Deputies were able to locate Rosario, who was arrested and charged with Felony Aggravated Criminal Contempt and Felony Aggravated Family Offense.  Rosario was transported to Central Booking Deputies at the Livingston County Jail for processing and pre-arraignment detention. The District Attorney’s Office was contacted regarding bail due to the felony-level charges. It was recommended that Rosario be held on $5,000 cash/credit or a $10,000 secured bond as the offenses did qualify for bail under NYS Bail Reform.