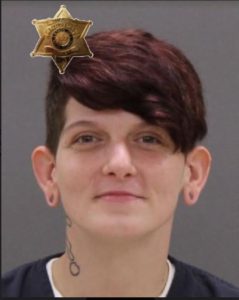 Sheriff Thomas J. Dougherty reports the arrest of a Cattaraugus County resident on felony charges following an investigation by the Sheriff’s Office.

On August 18th, 2021 the Sheriff’s Office responded to a residence on Rock Spring Hill Road, in the Town of West Sparta, for the  reported larceny through fraudulent means.

It is alleged through the investigation that Samantha M. Cossairt, age 29 of Olean, NY, on three separate occasions utilized another  individuals identity to make cash withdrawals from the victims bank account by signing banking withdrawal slips with the victim’s  name.

Cossairt was turned over to Central Booking Deputies at the Livingston County Jail for processing and released on an appearance  ticket to return to the West Sparta Town Court at a later date, as the offenses did not qualify for arraignment under the NYS Justice  Reform Act.

The investigation was handled by members of the Patrol Division and the Criminal Investigations Division.