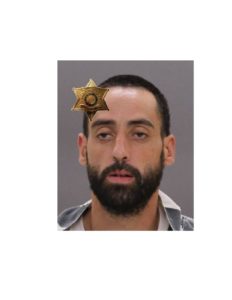 Sheriff Thomas J. Dougherty reports the arrest of a Springwater resident on felony  charges following an investigation by the Sheriff’s Office.

On July 21st, 2022, at approximately 10:45am, Sheriff’s Deputies responded to Depot Road, in the Town  of Springwater, for the report of a domestic dispute.

The investigation revealed that the dispute had been taking place intermittently over the course of several  hours. During that time, 36-year-old David W. Dale of Springwater, had physically choked a female and  obstructed her ability to breath. Also, during the argument, Dale allegedly kicked in a door to the  residence, breaking the frame.

Some of the alleged acts were also reported to have been committed in the presence of children in the  home.

Dale was arrested located on July 23 and charged with Felony Criminal Mischief in the Third Degree,  Felony Aggravated Family Offense, Criminal Obstruction of Breathing, Endangering the Welfare of a  Child, and Harassment in the Second Degree.

Dale was transported and turned over to Central Booking Deputies at the Livingston County Jail for  processing and pre-arraignment detention. The District Attorney’s Office was contacted in regards to bail  due to the felony level charges. It was recommended that Dale be held without the possibility of bail due  to Dale having several prior felony convictions and the law stating a local Justice cannot release.

Dale was later arraigned at the Livingston County Centralized Arraignment Part (LC-CAP) at the  Livingston County Jail before Justice Robert Ossont. The Judge did commit Dale to the custody of the  Sheriff and remanded him without bail. A felony hearing was set with a future court date.