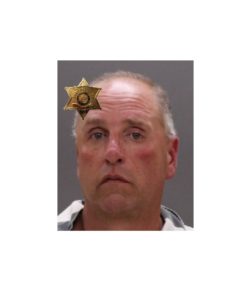 Sheriff Thomas J. Dougherty reports the arrest of a Steuben County resident on a DWI and felony weapons charges following an investigation by the Sheriff’s Office.

On May 28th, 2022 at about 6:40pm Deputy Dylan Bowser was assigned to the Sheriff’s Office STOP DWI Unit when he,  along with several other members of the Livingston County Sheriff’s Office Patrol Division, responded to South Livonia  Road in the Town of Livonia for the report of a rollover motor vehicle crash.

Deputies arrived and identified the vehicle operator as William J. Levesque, age 50 from Perkinsville NY. It was alleged through the investigation that Levesque was using his cellular phone while operating the vehicle, which was determined  to be a contributing factor to the crash. It was also suspected that Levesque was operating the vehicle in an intoxicated  condition. Additionally, a search on scene prior to Levesque being transported for medical attention revealed him to be  in possession of a set of brass knuckles.

At the time, Levesque was released to medical staff for treatment, while Sheriff’s Deputies awaited toxicology results to  determine his blood alcohol content.

On June 25th, 2022, Levesque was arrested at the Livingston County Sheriff’s Office Headquarters as the toxicology  report indicated at the time of the collision he had a blood alcohol content of .16%.

Levesque was also found to have a previous conviction of a crime, and as a result charged with Criminal Possession of a  weapon in the third degree, a Class D Felony, for possession of the brass knuckles.

Levesque was transported and turned over to Central Booking Deputies at the Livingston County Jail for processing. The  District Attorney’s Office was contacted in regards to bail due to the felony level charges, and recommended Levesque  be released on his own recognizance, as the charges did not qualify for bail under the NYS Justice Reform Act.

Assisting on scene for the Sheriff’s Office was Deputy Cheyenne Masiello, and Deputy Jason Page. The incident was  handled under the command leadership of Acting-Sergeant Michael Donals.