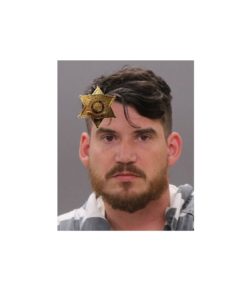 Sheriff Thomas J. Dougherty reports the arrest of a Monroe County resident on a felony  charge following an investigation by the Sheriff’s Office.

On May 29th, 2022, at approximately 2:45am, Sheriff’s Deputies responded to the Sugar Creek  Campground, in the Town of Ossian, for the report of a domestic dispute.  The investigation revealed that the dispute had been taking place intermittently over the course of a  couple of hours. During that time, 35 year old Michael A Lloyd of Rochester NY, had physically  choked a female individual obstructing her ability to breath. Also during the argument, Lloyd allegedly  pushed the female individual to the ground several times, as well as intentionally damaging her cell  phone.

All of the alleged acts were committed against the female who was a protected party in an active  complete stay-away order of protection placed against Lloyd.

Lloyd was arrested and charged with Felony Criminal Contempt in the First Degree, Criminal  Obstruction of Breathing, Criminal Mischief in the Fourth Degree, and Harassment in the Second  Degree.

Lloyd was transported and turned over to Central Booking Deputies at the Livingston County Jail for  processing and pre-arraignment detention. The District Attorney’s Office was contacted in regards to  bail due to the felony level charges. It was recommended that Lloyd be held on $1,500 cash/credit or  $3,000 secured bond.