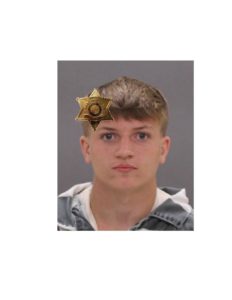 On August 2nd, 2022 at around 8:00 pm, Sheriff’s Deputies responded to an address on Flats Road, in the Town of York, after receiving a call reporting a physical altercation and property destruction during a domestic dispute.

The investigation revealed that Tony A. Gaddy Jr., age 20 of Canaseraga, had caused a facial injury to a male individual as  the result of punching him. Gaddy also allegedly damaged a wall inside the residence after shoving a female individual into it. During the dispute, Gaddy committed these acts in the presence of a juvenile who was in the residence at the time.

Gaddy was transported and turned over to Central Booking Deputies at the Livingston County Jail for processing and pre arraignment detention. The District Attorney’s Office was contacted in regards to bail due to the felony level charges. It  was recommended that Gaddy be released on his own recognizance, as the charges do not qualify for bail under the  New York State Justice Reform Act.